Were you looking for Nene from Friday Night Shootin'?

Nene is a character from Pico's School and part of the main trio of protagonists alongside Pico and Darnell. Various mods that add her in the game via reskin have been created.

Nene has slanted white eyes and short, black hair with a pink headband. She wears a pink overall skirt with a lighter pink long sleeve shirt underneath, light pink socks and pink shoes with heart decorations on the sides. In Nene Interactive Suicide and Pico's School, she has herpes all over her mouth. In Pico vs. Uberkids and Pico Roulette, she is also shown with large buck teeth, a stereotypically Asian trait. These are also shown for her images for the old Newgrounds art vote section, albeit significantly scaled down. In all of the mods she appears in, however, this is seemingly done away with, and she has regular teeth instead.

In Friday Night Shootin', she wears a noose around her neck, pink lipstick and magenta nail polish.

In Friday Night Funkin' HD, she wears a pair of golden hoop earrings.

Note: These cameos aren't canon in the Pico Series. 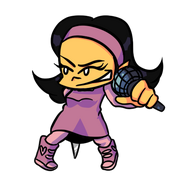 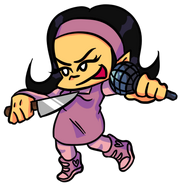 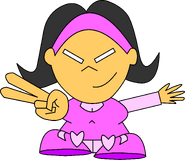 Nene as she appears in Nene Interactive Suicide.