Were you looking for his Covers/Mashups?

Neonight is a well-known YouTuber and one of the first channels to post BETADCIUs, however at the time he was just taking the covers from other sources. Nowadays, he makes his own covers and has even collaborated with other cover creators such as Vitor0502, Blantados and Sharv.

Neonight is a light-skinned male with black hair with fuchsia streaks. He wears purple and blue sunglasses and a headset with purple pluses. His outfit consists of a black jacket with yellow buttons and purple and blue lines below, a black shirt with a purple prohibition blocking a blue N, ripped jeans, and black shoes with white laces and soles.

Note: None of these cameos are canon to Neo's story. 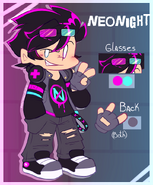 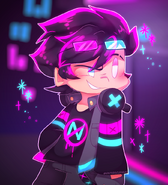 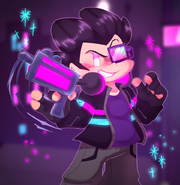 Ditto, but having an artwork made by WintersCuphead.