Night of the Funky Bot

Reason: We need static poses for Girlfriend,we also need the animated game over and the "retry",including it’s static one.

Reason: Lane's Hacked form may look a bit disturbing to some people.

Night of the Funky Bot

Night of the Funky Bot is a mod by SleepyPlayer16 that features 3 new weeks featuring the characters from Funkbot O2.

Lane comes from a game jam rhythm game called Funkbot O2, made by SleepyPlayer16 and a friend of theirs. She is the main opponent for the first week and first song of the second week.

Lane is a female robot with short blue hair, white skin and catlike ears. She wears a red shirt with a flower on it, a yellow skirt, and red shoes and gloves. She also wears a yellow face mask and blue goggles. She holds a microphone in her left hand and a yellow (possibly golden) watering can in her right. 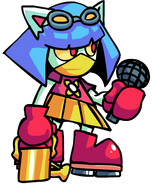 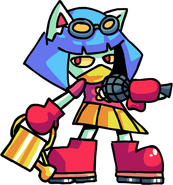 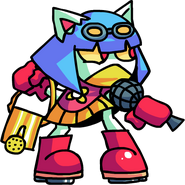 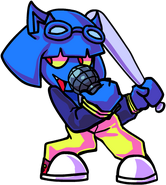 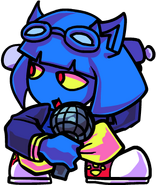 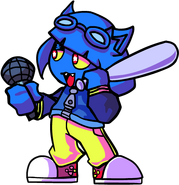 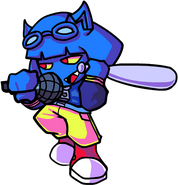 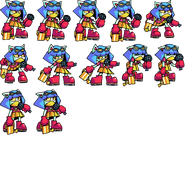 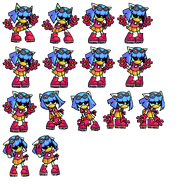 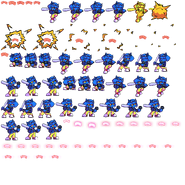 Path is the main antagonist of the second week. After getting rid of Lane, Boyfriend and Pico try to stop Path, but after it turns out that she is too strong for them, Girlfriend decides to take matters into her own hands.

Path is tall female robot with spiky grey "hair" styled in a braid and glowing red eyes. She wears a purple tank top, a pair of puffy grey pants and has black bolts on her arms and ankles. 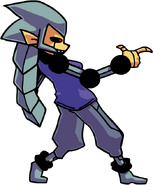 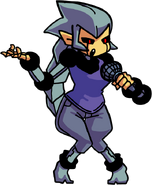 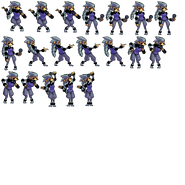 Lanelle is the main opponent of Week 3 for the mod. She appears to be Lane's inventor, since she shows up at the end of Week 2 looking very worried for Lane after being damaged by Path.

Lanelle is a tall girl with magenta hair, white cat ears and some burn marks on her left arm. She wears a dark grey tank top, yellow pants, and grey boots with black pants. 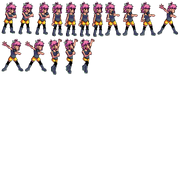 After Pico and Boyfriend were unable to defeat Path, Girlfriend takes over and takes the robot head on while covering for both of them.

Note: These cameos are not canon to Night of the Funky Bot's story.

Lane: I'm out there trying to fix this Goddamn city and thishow you thank me?

Lane: Fortunately, I am bulletproof. These toys you guys call "guns" won't work against me.

Boyfriend: You fucked them up real good, huh? But I've got a more important question.

Boyfriend: Is that music coming out of you?

Lane: What are you guys doing here? This place is dangerous.

Boyfriend: That doesn't answer my question

Lane: Yes I am playing that music, now please get out of here!

Lane: Air is extremely toxic in this city, you guys aren't even wearing a mask!

Boyfriend: How about we settle this with a rap battle? If you win we leave.

Lane: Oh you want me to calm down? Beat me in this stupid battle first then.

Lane: ...Sorry, my system is a bit glitchy and sometimes the "mean mode" activates by itself.

Girlfriend: Why do you have a mean mode?

Lane: I don't really know, it's something my creator added.

Boyfriend: So now that you're no longer angry, wanna sing a chill song?

Boyfriend: You have a great voice...even though you are a robot.

Girlfriend: I was expecting it to sound more feminine though.

Lane: Ah I can switch between female and male voices, I prefer to use the male one.

Boyfriend: Woah, that's cool. Anyway, you were right about the air, I can barely breathe in here.

Boyfriend: Let's sing another song before we go.

Beyond the Stars Dialogue

Girlfriend: It was nice meeting you...uh, what's your name by the way?

Lane: My name is Lane.

Lane: You know, that was kinda fun.

Lane: Um, do you mind if we sing another one? Just one last song.

Path: Stupid robot. You will no longer get in my way. This city doesn't need to be fixed.

Path: I can't believe Luna replaced me with such a useless and inferior version of me.

[A shot suddently hits Path on the head]

Path: Huh? Who are you guys? You are not in my database.

Path: Alright, I'm tired of this.

[Path charges a blow at BF and Pico, sending them flying against a wall, harming the greatly.]

Path: Ah hah! So weak, one hit was enough.

[Girlfriend glares angrily at Path and snaps her fingers.]

Path: What? You wanna challenge me too? All right then, bring it on!

[Path slams her fist on the ground in anger.]

[Girlfriend's eye glows red and she slashes Path, destroying her.]

Background for the Freeplay mode

Background for the first two weeks