Reason: This guy is part of a mod (Vs. Whitty) that got so popular, it's literally the second most popular mod out there, before and after it got discontinued/updated!

Reason: Somebody add the rest of the Boof's poses

Were you looking for the mod Vs. Whitty, or the characters Whitty, Updike, or Julian T. Whitmore?

Nitty Gritty is a secret character in Vs. Whitty Definitive Edition. This character strongly resembles Julian, but is a separate character.[1]

He exists in response to leaks for the mod, as an anonymous 4chan /funkg/ user had gotten a leak of Julian prior to the release of Definitive Edition from SandPlanet, reproduced the art they saw from memory in Paint, and showed it to everyone in the thread. According to Nate Anim8, the leak dates back to November 2021.[2] Nate also stated that Nitty Gritty's sprites were made as a coping mechanism for the leak; this is reflected in Nitty Gritty's song, Faucet, having a Vs /v/-tan-esque artstyle, faint use of “row row, fight the power”, the name of his sprite sheet’s file (“Thanks_4chan”), and the riddle shown after Underground (“What leaks but isn’t SandPlanet”).

Nitty Gritty wears a green jacket with white accents, black shorts, and either orange shoes or socks. He has a pure white microphone in his right hand. He has black hair in a ponytail, dark skin, and a grin with one orange eye. Along with all of that, his colors appear scribbled on top of them, with darker colors being the base and lighter colors being added on top. 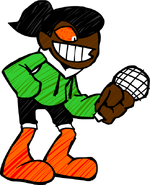 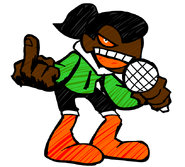 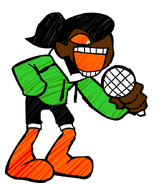 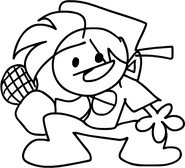 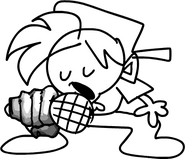 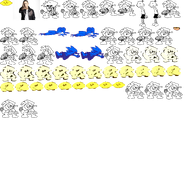 Artwork of Minus versions of Julian, Updike, Nitty Gritty, and The boof.

Artwork of Nitty Gritty and Julian by Sock.Clip on Instagram. Link

The leak that Nitty Gritty is based on, drawn by an anonymous 4chan /funkg/ user. Link