Reason: The mod she is featured in, Novanomikon's Redemption Redux, is rated Mature on Game Jolt as it contains profane language, references to sexual content, suggestive content and "weird humour", not to mention that she is a Shy Gal, a species popularized by a certain minus8. Her appearance is also very suggestive, with only a "bikini armor" and a cloak as clothing, some song names point out NSFW topics, yadda yadda. Her old left and right poses flashed colours very fast, especially the left pose, which rapidly changed her colours to negative and back.

Reason: The game over "song" can be unnerving. Novanomikon's new up pose may also look slightly eerie.

Reason: The redux is out on GameJolt and GameBanana. We need the new songs, as well as NK's animated idle & animated poses. We also need the dialogue, for every single song. People lets get to work! We gotta finish this!

I'M NOT GOING TO DESTROY YOU WITHOUT A LIVE TELEVISION AUDIENCE!! - Mettaton

Note: The original mod was trashed on both GameBanana and GameJolt.

Warrior in the CAT GODD alliance

Not to be mixed with Nova, who has the same namesike as one of her nicknames.

Novanomikon is a Shy Gal warrior of sorts who serves as the antagonist of the NK's Redemption and Novanomikon's Redemption Redux mods. She was created by Cauwakesque.

Novanomikon is a very tall, literally dark-skinned woman who wears a white mask with three holes: two for her eyes and one for her mouth and each of these orifices can be controlled by her. Part of her mask is hidden by dark magenta hair or broken and it is linked with a yellow strap. On top of her head can be found two greyish pink horns. As for her clothing, it is very minimal, wearing only a grey "bikini armor" plus a black cloak, and her lower limbs are replaced with ghost legs the same colour as her horns.

Her weapon, called the scythar, has a purple handle and features five colours on its blade, from top to bottom: green, red, yellow, blue and orange, referencing the fret colours from Guitar Hero and Rock Band. 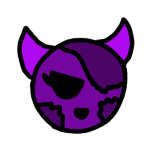 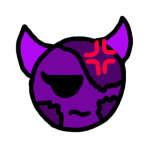 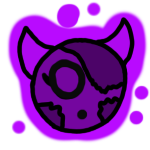 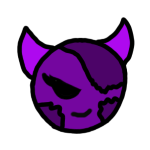 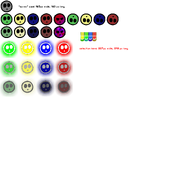 Novanomikon's UI used during her songs, with the notes changed to Shy Guy masks.

Her old icon grid, with a covered up Tankman and a chicken for some reason. 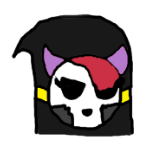 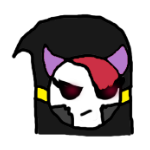 Thiong is very long and is redirected to a YouTube upload. Atychiphobia is shown here at a lower quality than usual.

Note: Plebiscite's audio file is also very large and the link will redirect to a YouTube upload.