Girlfriend (Is trying to be her friend.)

Skid And Pump (Sees them as brothers)

FNF Zanta but My ocs + ellie sing it

Olivia is one of Boyfriend's close friends since childhood, who's now also interested in rap battling and beep booping as well, giving Boyfriend a break, Olivia also has to try in becoming Girlfriend's friend. Because her parents don't trust her at all.

Olivia is a young dark skinned human with brown hair, the hair tied in a ponytail, and also wears a heart-shaped hair locker, she wears a one-shoulder purple and pink shirt, having three pins on it. a Cat, a Cloud with thunder, and the demisexual flag.

“She is not Dora, They don't even look alike.”
― The mod's intro text 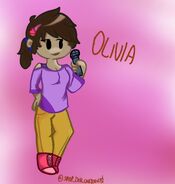 Olivia's icons, both normal and defeat.

Shop and some friends are working on a full week of Olivia. the link to the wip is here.