You know, the language you speak is quite outdated. You're probably one of the only people in the world who speak it. - B3 Daddy Dearest

Reason: There are more Papyrus mods.

Hark! I believe I'm in dire need of your services to learn Papyrus's current whereabouts. - ENA

“I WILL BE THE ONE! I MUST BE THE ONE! I WILL CAPTURE A HUMAN! THEN, I, THE GREAT PAPYRUS... WILL GET ALL THE THINGS I UTTERLY DESERVE!”
― Papyrus discussing his plans with Sans, Undertale

Papyrus is one of the main characters in the UNDERTALE. His motive in life is to capture a living human so that he can be accepted into the Royal Guard. He is Sans' younger brother and lives with him in the town Snowdin. Like his brother, Papyrus is named after the font his dialogue is always displayed in (that being the font Papyrus which is a font that is typed in all caps).

Papyrus appears as a tall and perhaps an anatomically inaccurate skeleton whose skull is more vertical and geometric compared to his brother. His eyes also resemble vertical slits, as well as his pseudo-brows preform most of the expressions he makes. He sometimes possesses eyeballs which only shows if he's expressing strong emotion. He is seen smiling in almost every pose (partially due to his personality, or due to having no lips to cover them).
He wears a red cape, matching gloves and boots, black stockings for his arms and legs, as well as a pair of blue briefs and a white chestplate with round shoulder armor and the Royal Guard logo on the top right. He calls this armor as a whole his "battle body". Papyrus is initially depicted without a microphone (J-Bug), however, he gains one in the game due to being modded over Daddy Dearest (JoetheHorse), as well as BunxMaker's Papyrus, and TheLunar27's Papyrus.

Papyrus acts like a flamboyant skeleton who presents a confident, charismatic image for himself. He is a hard working individual and despite his brash personality, he's still kind at heart. He is also optimistic, brave, and very considerate even if the protagonist beheads him during the Genocide Route. But, he is occasionally oblivious and non-observant, but can be cunning at times, for example, he uses reverse psychology to trick Undyne into befriending the protagonist. He depicts immense bravery even in the face of potentially inevitable death.

In J-Bug’s animation, the only abilities shown in this animation/mod is to give Boyfriend his notes. He doesn't do this a lot during his song so it's not that much of a biggie. It's also important to note that in the animation he isn't actually the one "creating" notes on Boyfriend's side - instead, his brother Sans uses psychokinesis to duplicate notes on Papyrus' side. In Undertale itself, he is able to send bones in multiple patterns as an attack, as well as make the player's SOUL affected by gravity. Papyrus is also one of few monsters able to use blue attacks.

Papyrus: I, THE GREAT PAPYRUS WILL CAPTURE BOTH OF YOU,

Papyrus: AND GET ALL THE THINGS I UTTERLY DESSERVE!

Papyrus: I WILL FINALLY ABLE TO JOIN THE ROY-

Papyrus: SING? YOU WANT TO SING?

Papyrus: WELL THEN IF IT TAKES FINE TUNES TO CAPTURE YOU... SO BE IT!!

Papyrus: I, THE GREAT PAPYRUS, IS GREAT A EVERYTHING INCLUDING SINGING

Down pose (marked as left pose in sprite sheet)

Right pose (marked as down pose in sprite sheet)

Left pose (marked as up pose in sprite sheet)

Up pose (marked as right pose in sprite sheet) 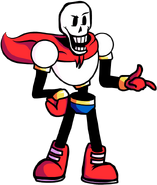 Papyrus at the start of the song

Papyrus at the end of the song 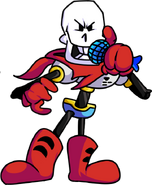 The entire setting used for the mod.