Funkipedia Mods Wiki
Register
Don't have an account?
Sign In
Advertisement
in: Characters, Full Week, Had References In Other Mods,
and 9 more

Bald (Does Not Have Hair.)

Phil Eggtree is the main character in the Riddle School series, by Jonochrome. Phil escaped class and saw Boyfriend and Girlfriend in the hallway. Boyfriend tells Phil that he got the key to the school and now Phil must have a rap battle with Boyfriend to get it and escape school.

Phil is a kid that is bald with a dark green hoodie, dark blue jeans and two brown shoes with two laces each. He also has black eyes with no pupils.

Phil: Now that was sharp!

Phil: Now to get down to busine-

Phil: Who are you two? (And where did that giant speaker come from..?)

Phil: Your name is "Boyfriend"? what kind of a-

Phil: On second thought, lets not get into how dumb our names sound.

Phil: I'm trying to get out of this dump right now, so if you could-

Phil: What do you mean you think you can help me?

Phil: Your saying that if I beat you in a rap battle you will give me the key?

Phil: Alright then, let's see what you've got!

Phil: To be fair though, it's gotta be a lot easier to win when you just copy off me.

Phil: That's how the game works?

Phil: On a another note, it seems like we have drawn quite the crowd!

Phil: Our rapping must've been really good or hilariously bad.

Phil: Either way, what do you say we have a rematch for that key?

Phil: And you won again.

Phil: (How does that make sense if we were only rapping for like 2 minutes..?)

Phil: We should proba-

Phil: Huh? You want a rematch?

Phil: I guess I could stay for one more.

Phil: After all, the crowd doesnt seem too interested in leaving anytime soon.

Phil: (They are literally just png's after all.)

Phil: You ready to get schooled?!?!

Viz: How is that possible?

Diz: It appears that a blue haired boy and a girl with a red dress prevented him from escaping school.

Viz: Shouldn't we be concerned about this?

Diz: I don't think it's anything to worry about, sir.

Diz: Because if he was trying to stop us, he wouldn't be rapping that blue haired kid on our ship right now.

Phil: Did you hear all that?

Phil: So I guess I've been in stasis on this ship.

Phil: Until you "Broke the cycle", whatever that means.

Phil: Nah, I'm not really concerned about this whole thing.

Phil: Say, are you up for another round?

Phil: After all, this is the perfect setting for an obligitory fast final song. 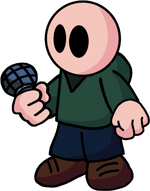 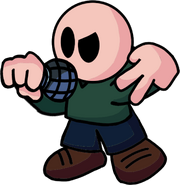 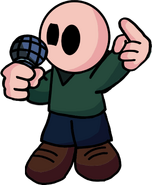 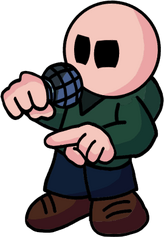 The crowd that shows up during Electro Slide

Phil as he appears in his original game, Riddle School

Phil as he appears in his latest game, Riddle Transfer 2