I would say what it's about, but I'm not too sure people would understand the message. - Sunday

This isn't how we're supposed to be. - Impurity

Note: The original concept is made by Jakeneutron, and these are fanmade poses for Pibbified SpongeBob

Reason: Learning with Pibby is a series known for disturbing imagery, blood, and gore, also SpongeBob as he appears in this mod may look disturbing to some people.

The Darkness (Possibly in Learning with Pibby)


Friday Night Funkin' (as a mod)
Learning with Pibby (Possibly)

“Listen, you crustaceous e̶͍͋t̸̡̎a̴̝̅k̸̳̍s̸̡̚p̴̡̕a̷̲͘e̷͖͗ḧ̶̨́c̴̲̒! Squi- been living in my house driving me c̷̭͑̆r̵͕̖͑a̷̠͚̽zy! And you're not going to hire him back all because of a stupid D̵͚͒I̸̢̍M̴͈̿Ȩ̸̚?̴͖̔!”
― SpongeBob SquarePants, Ready or Not


Were you looking for another Learning with Pibby mod?

Learn about the original source of the concept here.[1]

SpongeBob is a sea sponge with a rectangular shape. He is light yellow with a light olive-green outline. In earlier episodes, he is wider near the top and gets skinnier going further down, akin to that of a trapezoid. However, in the more recent episodes, he is more of a regular square shape. SpongeBob has light olive-green pores, dimples with three freckles on each cheek, a large mouth with two prominent front buck teeth, a long, slightly curved nose, and large light blue eyes. Moreover, his eye color seems to be, uniquely, a shade of pacific blue (or Crayola cerulean).

In this mod, he is surrounded and covered with the black sludge. His eyes are completely white with no color whatsoever, and his mouth is wide open. His eyes seem to be covered by a glitch-like substance. He also moves in insane-like poses in his singing animations. 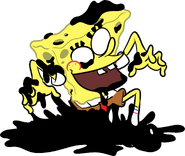 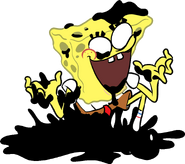 The Light That Reveals Spongebob's Presence About 30 Seconds Into The Song.

Gary and Pibby Hiding Behind A Chair. 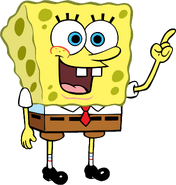