Funkipedia Mods Wiki
Register
Don't have an account?
Sign In
Advertisement
in: Characters, Outdated, Unfinished pages and stubs,
and 23 more

Reason: Skid Boyfriend, as well as the background and audio for Pay. Oh, and Pump committing un-live, and also pumpkin pie 2.0 is here with new songs and pulpon's true form, GET TO WORK BLEEDING PUMPKINS

Reason: Pulp's design looks rather unsettling to some. In North, blood drips from his hands.

Topic: It is implied that Pump died in the events of the mod.

Pumpkin Pie is a mod created by BetaHasNothing and stars the unused design of Monster. While Boyfriend was at a Thanksgiving party he started a rap battle with Skid and Pump. After that a strange monster came (being Pulp) and killed Pump in front of Skid, crawling inside his head as armour. After Boyfriend defeats Pulp he crawls and transforms into his true form, Pulpon for a final rap battle.


Not to be confused with Pumpkin Monster

Pulp, also known as Old Monster, Pumpkin Pie, Pumpkin Monster, or even Pumpkin Demon, is the old design of the original Monster from Friday Night Funkin. This mod includes a new song titled "Pumpkin Pie" (originally titled "Highway") and song "North", where he is replaced by Pulpon, along with the old Monster over the new one.

Pulp has the appearance of a black creature with pinkish bloody teeth surrounding his body, along with pink eyes and red pupils that often roll around. At his feet there is what seems to be a bloodied pumpkin. The pumpkin is, contrary to popular belief, not Pump's head despite the fact that see Pulp bursting out of Pump through his head. This occurs in a cutscene in the mod itself. Pulp is a spirit trapped inside of Pump's mask by an unknown entity, in his Week 2 form under the pumpkin, the main body continues down into the bottom of the mask.

In North, he is replaced by Pulpon, it shows a tall monster with a lemon-like head and with a dark mouth, bloodied claws, black pupils with bloodshot eyes. And he looks a lot like Monster. 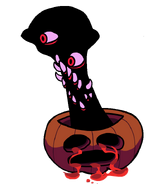 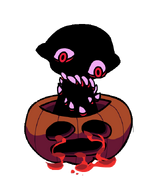 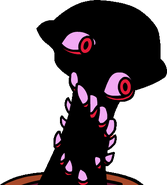 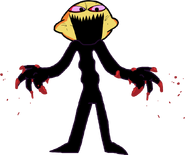 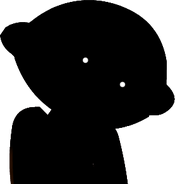 Pulpon in the title screen

Reason: Pulp's voice might be ear-grating to certain people.

Note: While Week 2 and 5 are freeplay exclusive, they are listed in chronologic order so the lore makes more sense.

Reason: This audio file samples one of Sr. Pelo's screams. Don't need to say much other than that.

Pulp: Sorry to crash the party, actually, I'm not.

Pulp: What did you say to me, punk?

Pulp: I THINK I WILL!

Pulp: BE PREPARED TO DIE!

Pulpon: Well look what the cat dragged in

Pulpon: and who's fault is that?.

Pulpon: could've ended it there in that room.

Pulpon: you had to be the "hero" and try to stop me

Pulpon: it didn't work if you can't tell.

Pulpon: ITS TIME TO END THIS

Skid: yo so like this is a preview of the next update

Skid: as you may or may not know

Skid: so dont expect too much because ell

Skid: It's not exactly done

Skid: this was basically made beacause i was tired of waitng

Skid: and i be so were all of you

Pulpon: who tf are you talking to

Pulpon: i am going to fucking murder you

The banner art for the mod.