Funkipedia Mods Wiki
Register
Don't have an account?
Sign In
Advertisement
in: Characters, Mods with missing downloads, Unreleased,
and 7 more

TBA
Were you looking for the character Fueg0?
Not to be confused with Pyro from Friday Night Fortress: Vs Mann Co

Pyro's Firey Friday, is a modded week called "Fuego", that adds 4 new songs called "Nuisance", "Outcast", "Hidden", and a currently unknown 4th song. In place of Boyfriend and Girlfriend are other characters respectively by the name of "Pyro", the namesake of the mod, and his friend Lust, and they are quickly swept into a battle against Fuego Furcifer. The mod is currently in progress; as of this update, it is unknown when it will release.

Being a huge music fan, Pyro sets on a adventure to make his name big. To pose as an audience, he drags his friend out of her house and makes her spectate his music duels, but little does he know his cocky attitude may get the best of him.

Note:None of these cameos are canon to fuego or pyro's story

Not to be confused with Fueg0.

Fuego Furcifer is the main antagonist of the upcoming mod "Pyro's Firey Friday".

His personality makes him a grumpy, uptight individual with a short fuse.

Fuego is a dark grey humanoid fox that wears white gloves and a dark purple hoodie with a broken purple heart. He also wears blue jeans with boots that are covered up by said jeans and has a painted scar on his face.

His Old design is mainly the same except he doesn't have a tail and he wears a white skull-like mask. 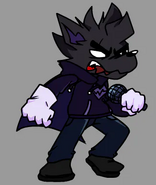 Both Fuego and Pyro's animated poses 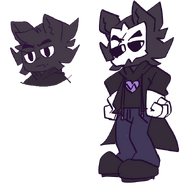 Being a massive cunt to everyone he meets

Pyro is a character created by SmilerFurcifer who serves as the protagonist in Pyro's Firey Friday. He is a massive cunt who is almost always bullying people no matter what.

Pyro is a red humanoid fox who wears a brown overcoat, a green shirt, navy blue pants, and gray shoes with white laces. He also wears a blue scarf with a heart at the end of it as well as a belt.

References in other mods 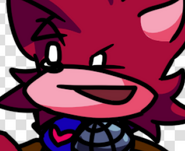 Pyro being smug as usual (possible up animation) 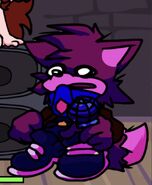 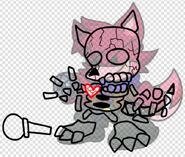 Note: Dates and times are based off EST, the date and times will probably be off for people who don't you EST

The old background for the mod. 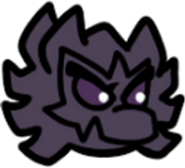 Note: - means unknown, please add them if you know who they are.

Note: This are old versions and won't be in the mod.

Note: Mod is still not released