Funkipedia Mods Wiki
Register
Don't have an account?
Sign In
Advertisement
in: Characters, Mods from the F3 FunkJam, Changed Arrow Style,
and 14 more

“You'll be golden once you invest in $ASH”― Richard Gyro, Get Rich


Not to be confused with Mr. Trololo.

Richard Gyro is your friendly neighborhood crypto advisor, willing to give advice on everything crypto, and is most definitely NOT trying to scam you out of your money! While Boyfriend and Girlfriend are taking the next flight to... wherever, honestly; they come across famed crypto advisor, Richard Gyro! And so, they sing.

He has three songs, being Get Rich, Short Sale, and Bankrupt.

Richard is a light-skinned, tall man with light-brown/blond hair and wearing a brown tuxedo with a yellow tie, gray pants, and brown shoes. He holds a glass of wine in his left hand and rests a laptop on his knee.

In Bankrupt, his wine glass is cracked and the wine is spilled onto his clothes, his hair is now disheveled, and he has a shadow or wrinkles covering his face. His eyes appear black. He seems very enraged. When he sings, he takes his anger out on his laptop

Narrator: Somewhere in the sky...

Narrator: We see a plane soaring through the sky. We enter the plane, as Portal 1's radio music plays over some indiscernible talking, while we some fruit in a bowl, as well as some "wodka".

Narrator: We then see Kade on a poster that says "buy low, sell high", and Bob on a poster, with him on the toilet, saying "Yes!" Richard Gyro clinks his glass of wine, while looking at his laptop. This is the life...~

Narrator: He takes a sip, as we hear the Bloxy Cola sip noise. Just then, a person on the intercom speaks up!

Intercom: Attention, attendees. A midget has been found in the cockpit, as well as his girlfriend. Please be aware that he has a reputation of rap battling anything and everything. Because he--he's a cunt. H-hehe~ he's a cunt-- Hehehe~! He's a cunt, what the fu--

Narrator: The intercom turns off. Richard looks around curiously. He shrugs, before he notices something, letting out a screech, dropping his wine. The Winter Horrorland jumpscare noise plays, as Boyfriend can be seen drooling, while Girlfriend is just... staring off into space.

Richard Gyro: Can't you tell I am busy?

Richard Gyro: You'll be golden once you invest in $ASH

Richard Gyro: Not enough for it to matter anyways.

Richard Gyro: You did hit those shiny notes right?

Richard Gyro: Alright alright, how about some more advice then?

Richard Gyro: I would never!

Richard Gyro: Why is the graph going down so much?

Richard Gyro: I'M GOING TO KILL HIM AFTER THIS!

Richard Gyro: BUT FIRST IT'S YOUR TURN! 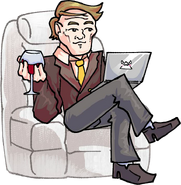 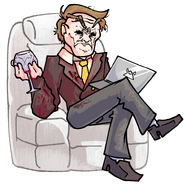 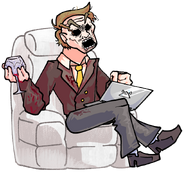 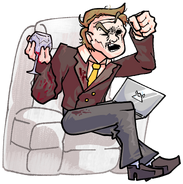 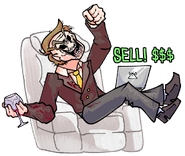 Angry Richard, happy that you fell for his ruse 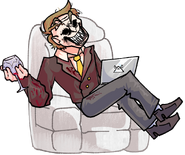 Angry Richard, selling your health away

Richard, throwing his glass of wine

The menu background for the mod

The background for the title screen