Reason: 37K+ bytes and a Rosie remaster is coming right away!

Come on! It's gonna be a big night! - Sarvente

Upcoming: Rosie's Week 1, Pick n' Pluck, is getting a remaster in the near future.

“You're fighting a Belladona with all the elegance of a rose, I don't completely blame you for losing to yours truly.”


Rosie is a character created by Shiba Chichi, starring in the Pick n' Pluck and the Belladona Sweets mods. She's the leader of a gang of fairies known as "The Belladonas" and is very territorial when it comes to the spots owned by her gang. When not protecting her gang, she moonlights as the main waitress of her own coffee shop, Donna's Cafe.

In Pick n' Pluck, Rosie appears as a tall elf with light pink skin and long, blonde hair that have small white pollen bits on them and two pink roses on each side of her head. She wears a pink shoulder top with a silver zip and a heart-shaped pull, a short white skirt, light pink ballet flats and white fingerless gloves with heart-shaped holes on the back. She wields a pink microphone on her left hand, while holding a pink and white gun on the other hand. During Poison, she throws away her mic and instead holds a pink and white rifle with rose decorations on it.

In Poison, Pink warning notes will occasionally appear. If you don't hit these, Rosie shoots you and half of your health will be gone.

Girlfriend: I know we dont frequent this part of town, but there's no need to be worried.

Girlfriend: I mean look at all these beautiful cherry trees!

Girlfriend: What could be scary about that?

Girlfriend: I know I'm right boyfriend, tee-hee. Lighten up will ya?

Rosie: You think you can just waltz right into Belladona territory?

Rosie: Yeah, you two have some dog shit awareness you know that?

Rosie: I know you.

Rosie: Yeah, I recall DD saying he had a daughter. His guns are some top-notch stuff.

Rosie: Heck. The old man even made a custom one just for me.

Rosie And I'm guessing you're the "imp-looking" boyfriend he's always complaining about, right?

Girlfriend: Uh..Since you already know me, does that mean I can enter?

Rosie: Of course! Any family member of DD is welcome here!

Rosie: If you really want to drag your tiny body over this territory, Then a rap battle is an order, yeah?

Rosie: Win, and I'll let you stroll along with your girlfriend.

Rosie: Let's just say that you'll be taste-testing the lead of my gun.

Rosie: So, how about it? We have a deal?

Rosie: Wipe that smug look off your face, that was just a warm-up!

Rosie: Looks like I gotta teach you a lesson in manners.

Rosie: I've had it up to here with you being a damn pest!

Rosie: I wont let you disrespect me...

Rosie: And I wont let you sully the Belladona name! You're gonna regret stepping on my turf!

Rosie: How... How am I going to protect my gang if I cant even beat a stranger...

Rosie: But- I tried to kill you!

Girlfriend: Yeah this an average Friday for us.

Rosie: I... I dont know what say. You are truly deserving of my respect. ummmmm?

Girlfriend: Yeah I couldn't believe it at first either.

Rosie: But isn't your name-

Girlfriend: I know I know, but thats what made it even more unbearable.

Rosie: Well thank you the Boyfriend. You're free to go with her. I wont bother you two anymore.

Rosie: But you can call me Rosie.

Girlfriend: It was nice meeting you Rosie! Come on Boyfriend, lets go!

Girlfriend: Aaaand here we are!

Girlfriend: Honey, could you switch off the beeps and boops this time. We're just meeting a friend.

Boyfriend: Anyways, are you sure this is the place?

Girlfriend: Considering the way my dad was snickering to high hell about this, I'd say yeah. She works here.

Boyfriend: You sure she'll be glad to see us again? Especially at her job of all places.

Girlfriend: Oh c'mon! It's Just like in the park, there's no need to be scared.

Boyfriend: And just like in the park you said that right before we got confronted.

Girlfriend: Yeah, but this time we're coming to the "threat" and not the other way around.

Boyfriend: Eh, I guess you're right.

Rosie: Welcome to Donna's Cafe, can I get you anything?

Rosie: Heh heh, not to be a bother but it's kinda early for some alcohol miss.

Girlfriend: Make it a cappucino then.

Rosie: (Why does that voice sound so familiar?)

Rosie: And what will you be getting sir?

Rosie: Rap battle? What do you mean by-oh! Boyfriend!

Rosie: I didn't even notice you two!

Rosie: Especially you Boyfriend, since y'know... You're actually talking now.

Girlfriend: Anyways, We were looking for you in the park, but you weren't there.

Rosie: But how'd you know where I work?

Girlfriend: I asked Daddy. I never knew you had your own cafe.

Rosie: Oh god. And how did HE know where I work?

Rosie: Damn, she was supposed to keep this a secret!

Girlfriend: Oh, has she been here before?

Rosie: Yeah, only once though. She asked for the same drink you tried ordering. The other server taste-tested it aaaand-

Girlfriend: Straight to the hospital?

Rosie: Well, the "orders" we take care of outside this cafe have been good thus far but.

Rosie: Working here brings me a different kind of joy that not even headshots could satiate.

Rosie: Lately though, the cafe's been slow on customers. I fear that I'll have to close if things don't improve.

Rosie: I hate to see it in this state. This place has been open for a good while now and I honestly don't want to give it up.

Girlfriend: That's all? We can help you with that.

Girlfriend: Well by the look of this place, what you need is some entertainment.

Girlfriend: Don't fret. I'm not trying to diss your clothing but people need more than eye-candy to attract the masses.

Rosie: That thing being?

Boyfriend: A good rap battle always does the trick! It always draws in people most of the time. And who knows, maybe someone we'll attract some colorful people.

Girlfriend: That's right babe! So Rosie dear, what do you think?

Rosie: Not a bad idea, let's give it a shot! Boyfriend, do you like Bossa Nova?

Boyfriend: Hell yeah I do!

Rosie: One Rap Battle, coming up! Hold the bullets!

[A clicking sound is heard.]

Boyfriend: Wait you seriously have a pistol on yo-

Rosie: That was amazing! You’re just as good as I remember Boyfriend!

Boyfriend: Haha, you’re not bad too! Your voice sounds better when you’re not angrily singing.

Rosie: I know I know, don’t need to remind me of that, but I have my reasons to protect that park, alright?

Boyfriend: Anyways, look at how many people are here now! It worked huh?

Boyfriend: Don't thank me yet, now we gotta entertain. You ready?

Alucard: Whoa whoa, easy there love! I missed you too.

Rosie: Yep! All thanks to my friend here! Meet Boyfriend......no seriously that's his name.

Boyfriend: Oh hey, I know you! Remember me? I used to hang with P-

Alucard: But I do know you, thanks for helping my girl with the cafe little dude. I appreciate it.

Rosie: Hey Boyfriend, how about we sing a love song for our partners this time?

Boyfriend: Sounds good! I’ll put my heart into this next one for you Girlfriend!

Rosie: Sit with girlfriend Alu, I want you to enjoy my love song for you too.

Alucard: Alright, do your best honey!

Girl From The Cafe Dialogue

Rosie: Here sweetie, I made your favorites. Ice cream sandwiches.

Rosie: Boyfriend, I can’t thank you enough for helping me today, this cafe means so much to me.

Rosie: I want to sing a special song with you as a sign of our friendship, what do you say?

Boyfriend: Sure! One more couldn't hurt.

Post-Girl From The Cafe Dialogue

Rosie: Today was so much fun. Thanks for paying me a visit. You guys were such a huge help! Will you come by again sometime soon?

Girlfriend: Of course! and we hope to see this place full of people when we do.

Rosie: Heh, I will try my best.

Boyfriend: We’ll be on our way now, it was nice seeing you again too Alucard!

Alucard: Same man, but just do me a favor.

Alucard: I'd like to keep this encounter and any future ones unknown to.....y'know.

Boyfriend: Sure! Not a problem. 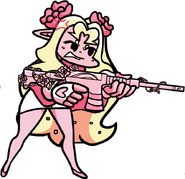 Rosie shooting her gun during Poison 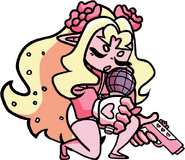 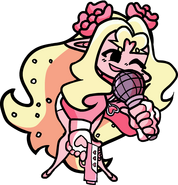 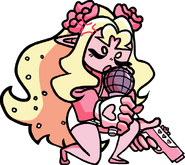 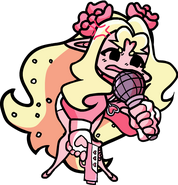 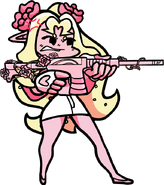 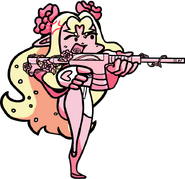 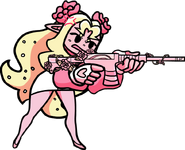 Rosie shooting her gun during Poison, but static 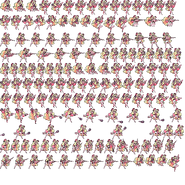 Rosie in the title screen of Pick n' Pluck 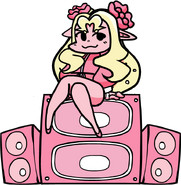 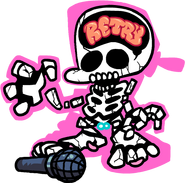 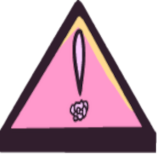 The warning note used during Poison

Preview of Rosie's idle for the upcoming remaster

Another preview of the remaster, showcasing the redone background 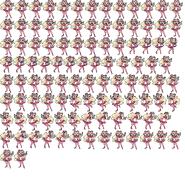 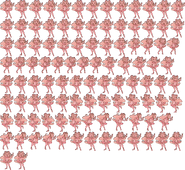 Rosie in the title screen of Belladona Sweets

Rosie in the main menu

Donna's Cafe dining area during Girl From The Cafe

Alucard as he appears in Love Shortcake

Alucard as he appears in Girl From The Cafe 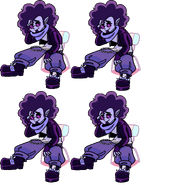 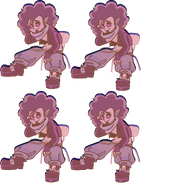 Boyfriend as he appears in Belladona Sweets 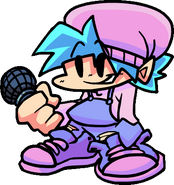 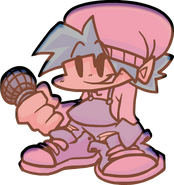 Girlfriend as she appears in Belladona Sweets 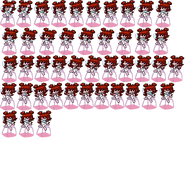 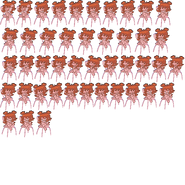 Rosie and the Belladona gang by Shiba Chichi

More Rosie doodles by Shiba Chichi, which includes a Sailor Moon Rosie and a genderbend version of Rosie named "Thorny" 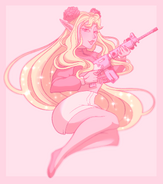 Realistic Rosie holding one of her guns

Rosie and Pico being "Gun Buddies" by Shiba Chichi, for Pico Day 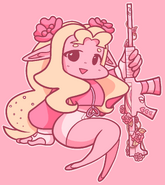 Chibi Rosie with the rifle seen in "Poison" by Shiba Chichi 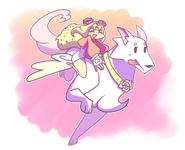 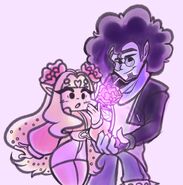 Concept art for a week 1 remaster. 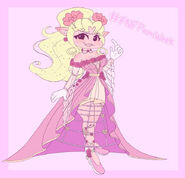 Rosie’s design for the Prom Week. She made the Dede’s herself.