Funkipedia Mods Wiki
Register
Don't have an account?
Sign In
Advertisement
in: Characters, Unfinished pages and stubs, Mods,
and 24 more

Racked and Ruined is a mod by Redsty Phoenix that features 2 new weeks featuring the characters from Darcayic.

Darcayic is a small project story by Redsty consisting of two parts, one of them is before Ruria and the other one is where Ruria's story starts.

Darcayic also happens be a standalone horror game with a few references of it inside the mod.

“Her father has sent his Regards.”
― Ruria, Have a Safe Trip

Ruria is a mercenary for hire and main antagonist of the mod. She met Boyfriend and Girlfriend who went to Russia for a lovely vacation to escape hot weather, only for her to block their path and seeking a challenge, with Boyfriend's life at stake.

Ruria wears a pair of track pants and a track jacket with a hoodie attached to it. It was made by Ruria's biological parents as a gift when she grew older, because she always wanted to be the character on her favorite show in Canada. Ruria also has a black area on her face, which is mostly called "Void Infection", an infection that spreads only if the host feels strong emotions. It can turn into a parasite once it is fed enough of the host's emotions. The infection was caused when she was stabbed by her own Client with a dagger made out of Materials from space, made out of solid Void. Her eye is also missing from getting stabbed and pulled out with the very same dagger.

She has a well built body with muscles and abs, along with body scars from her younger days.

Ruria is a stubborn and ignorant person, yet sometimes calm and collected. She gets annoyed or angry when she can't finish her job. Ruria may seem cold, but in truth she is kind once you get to know her, the reason for her kindness being that soon she will regret her actions at the later futures, as her biological father would say "Every action will have consequences."

Ruria lives and was born in Toronto, Canada, She was a happy child and happy with her parents. Ruria was a bit tomboyish, yet sometimes she tends to be girly due to the influence of her new favorite action show, "Panda Mercenaries". Ruria was really energetic when she was a kid once her parents bought her a BB Gun modeled on a WW2 M1911. Before her "Disaster", her parents left her a gift in her backpack when she was told to run, but it was too late. When the building collapsed on them, she luckily was still alive unharmed. She was found half-dead under a pile of rubble by Russian soldiers, and was taken for Emergency Care. After she was taken care of, she was adopted by one of the soldiers. When she was adopted, she grew up in Russia, and was harshly trained at a young age to be strong and prepared for the cruel world. After a few months, when her training is all finished, she ran away from home.

She started taking mercenary work after her mentor gave her first real gun, when she was around 17 years old. She's known for killing people without a weapon or anything that is around her, like a TV, a pipe, a stop sign, basically anything at her disposal. She was known for her methods and how efficiently she gets her job done. Later on, she was hired by an anonymous client to kill a CEO of a company that found a space mineral that came crashing down on Russia, although she didn't know that the one that hired her was the company itself, as they see her as a threat to their plans when they heard about her. After she arrived, she met a strange looking person. She then started fighting Ruria. After a few minutes, Ruria was cornered, then later on was stabbed by a special dagger on her left eye. Her eye was pulled out along with the dagger. She screamed in pain, then later on passed out from blood loss. She was later thrown away at the dumps, although the "Void Infection" later clot her eye wound that prevented her from dying from blood loss, allowing her to live on.

There are two new kinds of notes introduced in this mod.

Note: Some of these cameos are not canon to Ruria's story.

“Food is good as mine!”
― Minus Ruria, Hungry

Minus Ruria is a homeless innocent fox who is always hungry. When there was no job accepting her, she tends to steal food from other people, usually in picnics. She then got caught by the couple and decided to challenge them to a singing battle for food.

Minus Ruria is a mutated fox with orange fur. She wears a cloth tied into a hoodie, usually to keep her ears from getting dirtied. She has a black patch on her left eye that were caused by scientists who were doing experiments on wild animals. She is one of the survivors that escaped from the lab but at the cost of her missing eye. She then proceeds to mutate into a humanoid fox after years of her living with the Void Parasite (Void parasite works differently on animals).

Minus Ruria is nothing but an innocent fox who is new to everything after its mutation from the lab, she often finds work to buy food as she figured out how economy works, but when jobs won't hire her temporarily, she tends to steal food from other people unaware of it but she sometimes later on regrets the act.

Minus Ruria was a normal fox until a Lab Company took every animal for experiments. Her eye was gouged out by one of the scientists with a special Void Material. After her months of imprisonment, many animals died from the experiments but few surprisingly survived and had weird effects on them. One of the scientists felt bad for the fox and gave it a cloth to keep herself warm from the cold metal floor. Many months later, scientists are trying to sell Ruria as a weapon but before they did, Ruria went ballistic and destroyed everything around her and escaped, therefore she lived homeless ever since for years.

There are two new kinds of notes introduced in this mod.

Banner for the mod

Gameplay screenshot of the mod 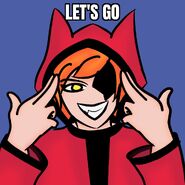