"Outside World" (Outside Gensokyo, that is)

Touhou Koumakyou ~ Embodiment of Scarlet Devil
Sakuya Izayoi is a character from the Touhou Project series, made into a mod that replaces Week 4, otherwise known as Mommy Must Murder. She is a maid in the SDM (Scarlet Devil Mansion) that possesses abilities to manipulate time (Time Stop, etc) and space. She is one of the few mods known to have a full map rework. She also has a custom song, which is Night of Nights, a remix of her boss theme "Flowering Night" from Touhou 9. The song is fairly difficult however.

or do you want to more about the limo driver of the mod, Hong meiling?

Sakuya Izayoi has silver hair with braids ending in a green bow, with black eyes and a white maid headband. She wears a dark blue French maid's outfit with an apron, short sleeves and a green ribbon. She carries a microphone in a "Waiting Patiently" pose, while gripping the microphone. A white bow is on her back and during her Up and Left poses, she can be seen to carry a grey watch. She frequently displays a tranquil yet confident smile. One of her braids tends to go behind her, leaving the other visible. Due to being modded over the Week 4 antagonist, some of her poses bear resemblance to the originals. 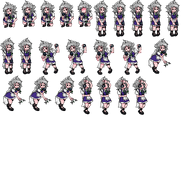 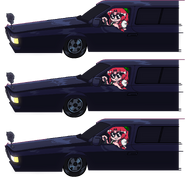 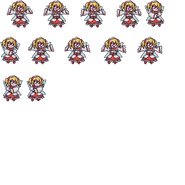 The limo dancer, replaced with a fairy maid resembling Sunny Milk. Several of these appear along the span of the limousine.