Reason: Contains major spoilers for not only this mod, but also Doki Doki Literature Club (and DDLC+).
Even the intro paragraph and infobox would give a lot away.
If you don't want to be spoiled about this mod and/or DDLC, stop reading now.

Reason: Sayori's source game contains themes of suicide, sanity slippage, stalkers, and depression. DDLC is essentially, to a new player, a bait and switch that goes from a cute and innocent little visual novel/dating simulator into a psychological horror experience.

When I woke up I felt sad, sad and lonely. - Trollge

Topic: Sayori commits suicide in her home game; the mod, which leans into associated visual imagery, may depress some users. She seriously is hanging herself in this mod

I'd say break a leg, but I might end up breaking yours literally, and I'm gonna make this as painful as possible for you... - Ruv

Im about to clap your ass - Animated Ball

Were you looking for Doki Doki Takeover's Sayori?

“There's no response. I really didn't want to have to enter her room like this...isn't it kind of a breach of privacy? But she really leaves me no choice. I gently open the door.”
― MC, Doki Doki Literature Club

Sayori (サヨリ) is one of the protagonists of the popular game, Doki Doki Literature Club. She appears in a mod made by NEONVORE, the creator behind Friday Night Shootin'. The mod consists of a single song named "Happy Thoughts" where Boyfriend raps against a glitched and suicidal Sayori.

Sayori appears to be a young teenage girl with short, coral pink hair and a bow. She wears a white shirt and red shorts with no footwear, as well as a noose around her neck. She also has blood on her fingers at where her nails would be due from when she tried to claw the rope around her neck as an attempt to set herself free.

When singing, her face appears to be horribly glitched due to becoming a corrupted file at this point in the storyline.

Reason: The bass boost drops that can be heard in Happy Thoughts are loud. 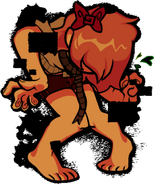 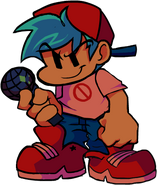 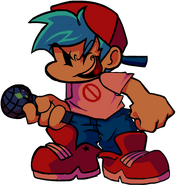 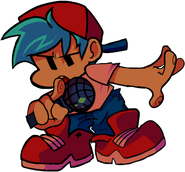 Boyfriend's losing icon from the mod 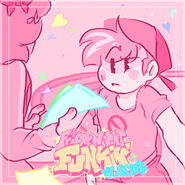 Background for the mod's week