Reason: There are spoilers to some of the Scott the Woz episodes (especially borderline forever) and the mod itself

Reason: Animated gifs of everything, backgrounds, dialogue music, info for music, and other assets

Hey there, are you ready? I've been waiting a while for this... - Bob

Scott The Woz
Friday Night Funkin' (as a mod)

“Hey all, Scott here!”
― Scott the Woz, Basically every episode

Scott Wozniak is a character made by Scott Wozniak, and modded in by humbaynoob and Binounoliky. While Scott is getting started, trying to review FlingSmash for the Wii, Girlfriend appears on his desk, and so begins the battle to end all battles! Well... rap battles...

Scott wears a blue hoodie, has glasses, has brown hair, and has light brown pants, and brown shoes.

Scott: Hey all! Scott he—

Scott: Oh no! I really forgot to put up that "No Sex Allowed" sign on my door... Now what am I gonna do?

Scott: Okay, now you might be thinking; "Oh no Scott, Friday Night Funkin? Now you're NEVER going to be laid!"

Scott: First of all, I talk about video games.

Scott: Second of all, we've already had two world wars anyway; who the hell cares if we have another one?

Scott: Friday Night Funkin' is a unique twist to the whole rhythm game genre and gives a whole new approach...

Scott: ...kinda like Rhythm Doctor without a medical degree!

Scott: Singing against an opponent to a rap battle just gives more flavor to the entire genre and is just so original!

Scott: I mean even I can sing against my mortal enemies now!

Scott: ...but c'mon, why would a 23 year old human need something other than a singular hobby talking about video games...

Scott: I mean BAM! Look at all my music that I've sang that doesn't revolve or relate to my crippling obsessive hobbies!

Why Don't You Play Them Dialogue

Scott: Okay, I might just be a little fucked.

Scott: This guy is just repeating everything I sing and getting away with it..

Scott: ...and I reeeeaally don't think that's how a rap battle works.

Jeb Jab: I don't think he can speak.

Scott: WAIT WAIT WAIT!! I meant advice for singing against him!

Terry Lesler: Have you tried chloroform? 100% vegan, knocks them out.

Rex Mohs: I immediately came as soon as I heard about Scott doing something other than talk about video games.

Target Employee: If a customer is too loud or singing, please gently notify the customer nicely to stop and dispose of them in the manua-

Terry Lesler: Hold it for a second.

Terry Lesler: Now that I think about it... That's not vegan.

Scott: Isn't being a vegan related to preventing animal torture, not human??

Scott: AUGH, any other ideas on how to get me unfucked?

Terry Lesler: You're a virgin, you can't get unfucked.

Rex Mohs: As your moral support, I think you should try using the power of friendship.

Scott: Of course not!! The whole point is for me to sing!

Scott: Is there SERIOUSLY no beating this... how old is this guy anyways?

Scott: What does that even mean???

Scott: How do you even sing with blue hair constantly blocking your vision???

Scott: It's not like I in any shape or form deal with having something blue constantly bothering me....

Scott: What the hell did you do!?

Jerry: Turns out shooting people in the head can kill them.

Jerry: I just read a barrel blast manual and you just completely revitalized.

Jerry: Look, I've dealt with plenty of murder clients, I got over 50 on my SAT, you're in good hands.

Scott: Just wake me up already!!

Jerry: I got to remember this for next time.

Rex Mohs: When I Heard You were in the hospital, I dropped everything and came straight here.

Jerry: Sh, there's a library across the street.

Jeb Jab: Oh man, I've been trying to get in this place for years.

Target Employee: I called 911, I asked them how you were doing?

Scott:Oh, I have some questions for them, what's their Snapchat? 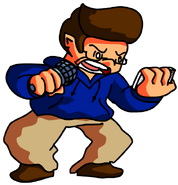