Were you looking for the Shepherd mod, made by Rhubarb?

Shepherd is a character created by Joel G and modded in by Supercario. She guards the Hourglass Meadows, and tells ENA that the Great Runas is no longer giving out horoscopes. ENA then gives her the Turron, which prompts Shepherd to give her the blood ID to allow for her to go deeper into the Great Runas.

Shepherd appears to be feline to an extent, and resembles ENA in some areas, most notably her two-toned body. One side is red with an oblong light yellow cat eye, the other is white with a cartoony light yellow human eye and a red cheek. Her mouth is only on her red side, and her white side is the only one with an eyebrow. Her look is topped off with whiskers, pointy black cat ears, and two thick brown pigtails. Her appearance strongly resembles a painting by Pablo Picasso of his cat.

Shepherd's outfit consists of a brown button-up vest exposing her midriff, and a matching long brown skirt tied with a red belt. She also holds a shepherd staff. 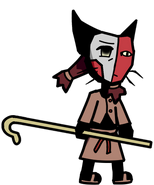