Reason: The background in all of the songs flash, more so in Manifest.

Issues detected: Some, probably most, of the stuff is outdated, biased, etc. We'll be working on that.

Reason: The mod has 2 million views on gamebanana!

“It worked! The shift worked! We can be together forever, The Boyfriend!”
― Sky, Pre-Wife Forever


Sky is a 19 year old woman, and the main antagonist of VS. Sky, made by BBPanzu. She is a fangirl of Boyfriend and wants to marry him (kinda like Sonic and Amy). Her week includes 3 songs, which are named in order, Wife Forever, Sky, and Manifest. The mod used for her has been praised for its creativity, but it's also been controversial due to how people interpreted Sky.

After Sky uses a shift in time, she gets teleported to the Friday Night Funkin' universe, through semantics, and traps Boyfriend and Girlfriend in a white void. She seems to have hard feelings for the blue haired rapper and tries to show her acts of love through a song. After Wife Forever, she gets really annoyed that Boyfriend doesn't want to date her and is already committed to Girlfriend. This would lead to Sky getting all angry and failed to convince him through song a second time.

She then snaps into Manifest and crucifixes Girlfriend, who does not seem phased in the slightest (probably due to her demon DNA, or her being canonically too stupid to acknowledge that the pain she might be feeling is a bad thing). Girlfriend calls out Sky for being able to manifest crucifixions, but not able to manifest men; even telling her to go shift to Danganronpa while calling her a "dweeb". She flips her off for good measure, making Sky even angrier.

In the good ending, she is ultimately defeated. Boyfriend and Girlfriend escape the white void and head home to have some Wendy's, leaving Sky's fate uncertain.

In the bad ending, Girlfriend manifest to her cross. Boyfriend is now forced to live with Sky and his dead Girlfriend.

Sky has magenta eyes and long sky-blue hair. She wears a white t-shirt with a red check mark, as opposed to the BF's crossed out circle, a blue jeans skirt and black boots.

When she gets pissed, she gets a little anime anger symbol near her forehead, as her eyes turn white.

Meanwhile, when she gets mad, she goes full beast: her hair changes into a dark gray color, her skin turning bluish gray, with half of her arms being covered in some sort of black liquid, while her hands also grow claws on them, and her eyes glowing a bright red, although her clothes stay exactly the same as before. Her voice also gets more deep and feminine, sounding more like an adult woman than a toddler girl.

Sky: Now we can be together forever, The Boyfriend!

Sky: What do you mean you don't want to date me??

Sky: What do you mean you're in a committed relationship??

Sky: it's that stupid girlfriend that's keeping you away from me??

Sky: ..i'll just manifest her away

Sky: IT MEANS YOUR PRECIOUS LITTLE GIRLFRIEND IS GOOD AS GONE.

Sky: you stole Boyfriend away from me..

Girlfriend: ha. you manifest crusifixions but can't manifest any guys.

Boyfriend: ok GF, i think your being a bit mean don't you think..?

Sky: You won't ever have to worry about her rude ass no longer 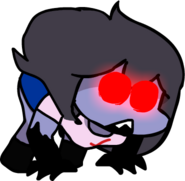 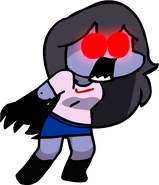 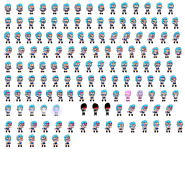 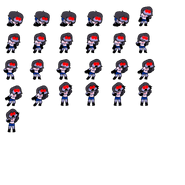 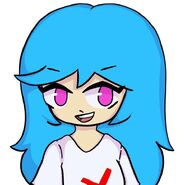 A detailed drawing of Sky by @bfswifeforever.

Girlfriend crying when a note is missed.

Front banner for the mod

The seizure warning listed before the Sky mod.