Reason: Slenderman originates from a creepypasta, which are known to be violent and unsettling. Alongside involving an incident where a teenager was stabbed almost 20 times by her "friends" and said it was to appease Slenderman, which this information can creep people who have been stabbed or watched a stabbing happen or a stabbed person.

I JUST WANT TO GO MY INTERVIEW WITH Slenderman, STOP RUINING IT - Arrow

Reason: This mod is a demo.

Not to be confused with the other Slenderman, even though they are the same character.

Want to learn more about Slenderman?

Slenderman is a supernatural creature who is known for roaming around forests. Like Jeff The Killer and Sonic.EXE, he is an age-old creepypasta.

Slenderman is a pale-skinned and tall humanoid monster with claw-arms and no face. He wears a black suit and black shoes, he also has four black tentacles moving around his back.

Note: All of these cameos are not canon to Slenderman's story: 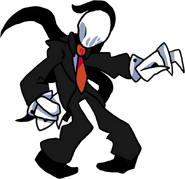 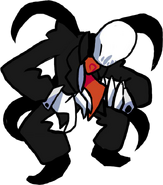 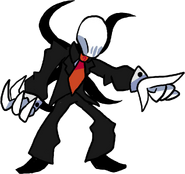 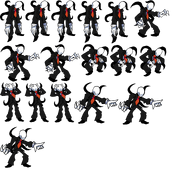 Boyfriend's icons for the mod

The background for the mod