Reason: Portrays overworking and paying off debt, barely leaving enough money to live, which may sadden those who've gone through similar experiences. Rebecca also gets progressively bloodier as the mod goes on, passing out at its end. Also, the menu has an eggplant with veins, not exactly leaving much to the imagination.

Note: The mod was very popular and the google search of "Starving Artist" was Rebecca at first image. (Yes this image will direct on this wiki.)

Were you looking for the sequel, Retaken Sanity?

Starving Artist is a self-insert mod created by Rebecca_Doodles showcasing herself in 4 songs.

“But don't worry about me. Sacrifices have to be made to get somewhere in life.”
― Rebecca, Aspirer


Rebecca is a 24 year old half demon cartoonist that stars in her own mod: Starving Artist. Her week has 4 songs: Hunger, Aspirer, Crybaby, and Empty.

Not much is known about her, other than she worked 4 years on her own cartoon, hasn't slept since work and that she wants her parents to be proud of her.

Rebecca appears to be a tall, pale woman with dark blue hair and cyan eyes. She always has a sweat bead under her right eye. She wears a tattered dark blue t-shirt and long black tattered pants as well as dark blue shoes. She holds the mic with her left hand and can also be seen holding a pen in her free hand. In Crybaby and Empty, pink blood is seen trickling from her mouth and on her shirt. Her eyes also change color depending on the notes she hits during Hunger, Aspirer and Crybaby.

The Starving Artist mod was made for "venting" of Rebecca_doodles overworking.

Rebecca_Doodles and her family had surgeries. Her mother had a diagnose operation which ended up being cancer, her father had a hernia operation, and the author herself had wisdom teeth pulled out. During that time she was the only one making money in the family. This led her to constant overworking to the point being close to hospitalization. Majority of the money making was from drawing a lot of NSFW commissions for others to support her family and her cartoon "Stellapie."

According to the Gamebanana page and announcement on the Twitter account, the artist is doing fine at the moment. She thanks the community for being concerned about her well-being and now knows her boundaries and limits.[6]

Note: All of these cameos are not canon to Rebecca's story: 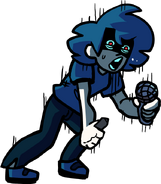 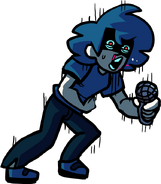 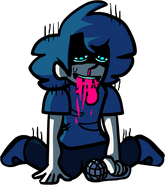 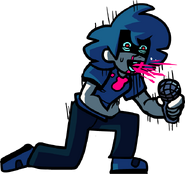 Rebecca passing out after Empty.

Rebecca about to pass out in Empty

Rebecca after passing out in Empty

Rebecca in the main menu

Rebecca in the Story Mode menu 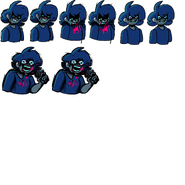 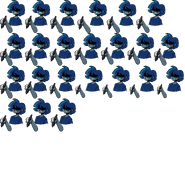 Rebecca in the main menu assets

Sketches of Rebecca's poses during Hunger(?). (Found in her .fla.)

Sketches of Rebecca's poses during Crybaby. (Found in her .fla.)

Sketch of Rebecca after passing out in Empty. (Found in her .fla.)

Sketches of Rebecca's portraits. (Found in her .fla.) 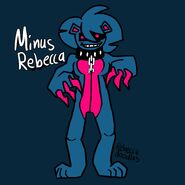 Minus Rebecca done by Rebecca herself, she is a bear.

Reason: The alarm clock in the instrumental of Crybaby gets progressively louder at the end of the song, Rebecca's voice during Empty can be ear-grating to some people.

Rebecca: The kid that answered my "I will do anything for money" ad.

Rebecca: I have to warn you though I am not a good singer.

Rebecca: What I need the money for?

Rebecca: I have been working for 4 years on my own cartoon. As you can see it doesn't pay the bills.

Rebecca: But don't worry about me. Sacrifices have to be made to get somewhere in life.

Rebecca: So let me earn my pay.

Rebecca: Why are you stopping?

Rebecca: This is fine.

Rebecca: It's cool, everytime i don't sleep enough this happens.

Rebecca: Though sleep is for the weak.

Rebecca: I need that money, so you better keep going!

Rebecca: I have to

The background during Hunger

The background during Aspirer

The background during Crybaby

The background during Empty

The background during Hunger (Alpha)

The background during Aspirer (Alpha)

The background during Crybaby (Alpha)

The background during Empty (Alpha) 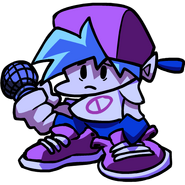 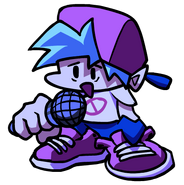 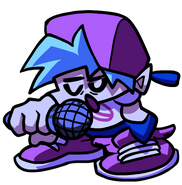 BF's Static down pose during Aspirer and Crybaby 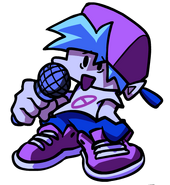 BF's Static up pose during Aspirer and Crybaby 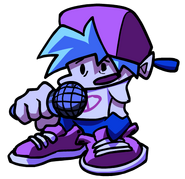 BF's icons during Aspirer and Crybaby 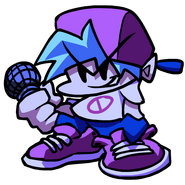 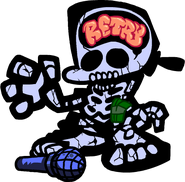 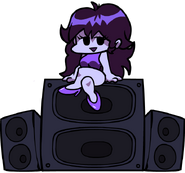 Reference photo given to SandPlanet for charting