Note: This mod has reached 200k views on Gamebanana recently.

Reason: We need animated poses for Static in the gallery. That's it.

“A defective bot like me doesn't belong on the outside.”
― Static, Funkhead

Static is a defective rapper robot, a huge fan of Boyfriend and Girlfriend, and the main opponent of the VS. Static mod. His mod comes with four brand new songs, plus an extra one in a separate week that you unlock later on.

Static has a TV for a head that has crooked yellow antennas, he also has blue headphones, and a black baseball cap with a golden volume symbol on it. He wears a black hoodie, blue jeans, and black sneakers and has a microphone which is painted gold.

An unknown period of time has passed, until one day, after Boyfriend's late night date with Girlfriend, they were both sucked inside the TV again but in the TV World which was the same one Static was trapped in. Static recognizes both Boyfriend and Girlfriend and wants to help them to escape the TV World but not before he decided to challenge Boyfriend, but Boyfriend emerges victorious, but Static doesn't really care about losing since he is just happy to see someone to visit TV World and is curious on what is like to live in the outside world.

He eventually challenges Boyfriend again but after having been bested twice, The TV world started to become distorted and a green screen appears in the center of TV World. The green screen itself is a doorway that opened because of Boyfriend and Static's songs. He knows that the green screen can only fit for one person only and that Boyfriend can't escape the TV World without Girlfriend. He figured out that the songs he did with Boyfriend had caused the green screen to appear. He figured that they should make it stronger by continuing to sing a song.

Once out of the TV World, Static decided to travel the world in search of new things and friends. The first thing he ever did once out of there was go to the nearest park and look up at the sky, awestruck. Genesis takes place a few days after Static escaped the TV world.

Note: None of these cameos are canon to VS. Static's story.

Static
Wh-What the-?! How did you guys get here?!

Static
Nobody is supposed to be in the TV world but me! Did you get sucked in or something?

Static
I haven't seen anyone here in person since they put me here all that time ago...

Static
Why all of a sudden now? This is weird...

Static
What was that? Didn't quite catch that, dude.

Static
You're that couple I keep seeing everywhere, aren't you?! Dude, I'm like, a huge fan!

Static
I promise I'll help you guys get back to your world, but while you're here...

Static
How about a quick battle? I'm good with a mic too, you know!

Static
Woooo! What a rush! My head is still buzzing!

Static
Looks like I lost, but to be honest, I don't really care.

Static
It's just nice to have some visitors. The TV world can be lonely, you know?

Static
Say, what's it like, living out there in the real world?

Static
I've only ever watched form the outside, So I've always wondered what it's like.

Static
Ha! You know I still can't understand a word of what you're saying, dude.

Static
But you seem happy. It must be pretty great, huh?

Static
Maybe one day, I can...

Static
...No, That's a silly thought.

Static
When they put me in here, they said I was defective.

Static
A defective bot like me doesn't belong on the outside.

Static
Still, it sounds like a cool place! You two must miss it already huh?

Static
But while you're still here, how about another battle?

Static
Alright! You're on!

Static
This was a bad idea. This place wasn't meant to handle more than just me!

Static
I'm detecting an unhealthy amount of distortion from everything around us!

Static
It's completely overwhelmed... This is bad, dude. You g-gotta get out of here, ASAP!

Static
That glowing green screen in the center... That's your way out!

Static
It looks like it's barley strong enough to pull one living person out, but...

Static
I have a feeling neither of you would want to go through without the other.

Static
That's what I thought. You seemed like the ride or die type anyways.

Static
In that case... If our song opened it up, maybe we can make it stronger, too!

Static
Get ready to sing your gears out, B.F.! Give it everything you've got!

Static
High five dude! It looks like it's strong enough for the two of you!

Static
Now go, before it closes! I don't know how long that'll hold!

Static
What are you saying, dude? I still can't understand you.

Static
You two are crazy, you know that?

Static
If I go now, there's no turning back. It's a one way trip.

Static
I haven't been out there in years- no, decades!

Static
Everything would be new and alien!

Static
...Heh. You have a strange way with words, funky little dude.

Static
Maybe the outside world is worth giving a shot after all.

Static
Hey you two! Been a while, huh?

Static
This world you live in is absolutely crazy, you know that?

Static
I even touched that green thing in the ground for the first time!

Static
The world is so much more beautiful in person, dude.

Static
I've got you to thank for bringing me out to see it.

Static
Hey, how did you wind up walking into the TV world anyways?

Static
But it was fun getting to jam out with you back then, yeah?

Static
What do you say? Down for one more round? 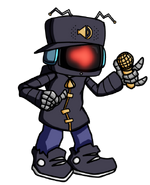 Static in the main menu 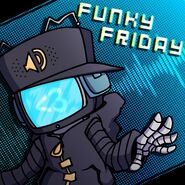 Official Minus design for Static by Summus. 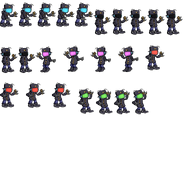 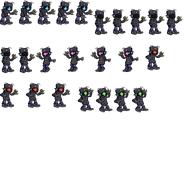 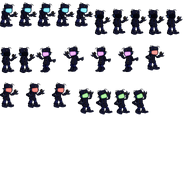 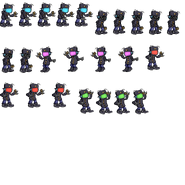 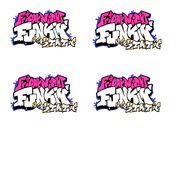 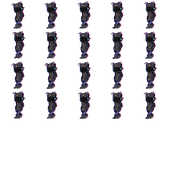 Static in the main menu assets 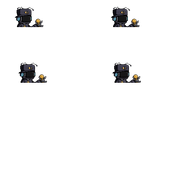