SURVIVE MY PLAYHOUSE OF DEATH FOR A CHANCE TO WIN BIG PRIZES! - Nexus Tricky

Reason: The screen shakes in Genocide whenever Tabi sings.

so much dialogue in this mod god damn - Boyfriend

Reason: Tabi explodes the restaurant with bombs in "Genocide", he also harms Boyfriend, Girlfriend, and himself with said bombs. If Boyfriend loses in "Genocide", a knife can be seen visibly stabbed into his skull. His new appearance and poses in "Genocide" may look creepy to some people, and also its name. One more thing forgotten to be told, the second part of the below.

How do you think I feel being used to cause chaos for uncontrollable reasons? - Cassandra

Reason: Tabi's backstory is pretty saddening. Also, he and Girlfriend used to own a cat, but it was killed by the kidnappers just for "fun".[1]

Reason: A week discussing the backstory was teased at Funkin' Forward

Reason: This is one of the most popular EX Mods.

“Like she used me once, now look who I am, just a floating skull with an invisible body, I’ve lost everything!”

Tabi is a character created by Homskiy. He is the ex of Girlfriend.

He was originally a successful rapper before realizing he was being used by Girlfriend and her father for their own gain, until later being kidnapped and leaving him as the way he is now. He comes back a year later to settle the score with them, even if it means wiping out anyone in between.

In Genocide, he holds a tactical airstrike (bomb detonator), and his pants, jacket, and hat have some scratches, tears, rips, and holes. He sports many cracks and crevices throughout his body, and having a broken lower jaw, multiples of cracks on the goat headed skull, left hand, and right horn. Also, some of the parts that were on the top half of his left horn are missing.

Tabi is shown to have extreme hostility and anger issues, given that he has been holding a grudge against Girlfriend and Daddy Dearest for a year. He also seems to have a merciless attitude after blowing up the restaurant, killing multiple people and severely injuring most of them just to kill Girlfriend. Surprising or not, he does not hold a grudge against Boyfriend. In fact, he tries to persuade him into leaving Girlfriend behind, as he thinks Boyfriend is just another "victim". He holds that mindset until his second song, Last Chance, when he realizes Boyfriend was not allowing him to hurt/injure Girlfriend, no matter what. He is also close friends with A.G.O.T.I. and closer friends with his older brother, Aldryx Andromeda, as well as Ayana. When Girlfriend was still dating Tabi, he was a normal human, and also a music producer who had passion for his work. His relationship to Girlfriend was very strong, until Daddy Dearest decided to use him for his own benefit, and Girlfriend had no intention of doing this. While Tabi was a normal (and visible) human, he was known to be really kind and nice.

When Tabi was a baby, his parents abandoned him and he lived in an orphanage.

Tabi and Girlfriend were actually dating at some point in time, though a year later, they broke up. When they both started dating, he was a novice music producer who had passion and love for his work. Their relationship was going so well, all until he met her dad.

The Betrayal Itself (Or After Betrayal)

Girlfriend's dad, being an ex-rockstar, wanted his little girl to be just like him. That's why they both started using Tabi for their advantage. Years had passed since they were together, when Tabi suddenly came to notice that his girlfriend was using him for her own career and didn't actually care about him at all. And at the time, he even lost his career helping his girlfriend to become a star. He had to sacrifice doing what he loved and do what she tells him to do. Once she knew he understood everything, a couple of guys came to Tabi's house and kidnapped him. He woke up in some alleyway without clothes, and…surprisingly, without his body. To his shock, it was invisible except his hands, which were reduced to pure bones.

After having been reduced to just about nothing, Tabi was massively depressed and saddened by what had occured. However, he quickly knew who did this to him right away, Daddy Dearest. And for that, he will take his revenge by killing them both.

Another year had passed, he's made a plan and he's ready to execute it.[8]

Tabi was preparing his plan for at least a year. During his preparation, he would sometimes spy on Girlfriend and Boyfriend battle other opponents such as Tricky and Whitty. Once he realized that it would not be easy taking Boyfriend out, he adopted Whitty and Tricky's singing styles to get Boyfriend out of the way.[9]

After attempting to defeat Boyfriend three times in their rap battle, he was defeated and his plan to kill Girlfriend ended in failure. Not much is known on what happened after the incident but Tabi may have escaped.

During Genocide, Boyfriend will constantly lose 1% health per second. Each note on Tabi's note chart (which will glow for each hit) will also lower Boyfriend's health by 1%. To balance it, Boyfriend will be starting at 100%, rather than the usual 50%, and the max health he can get is 150%, which is displayed by moving the HP bar itself to the left.

Note: None of these cameos are canon to Tabi's story.

Reason: (Please do not delete this). The beat at the beginning of Genocide starts out very loud and when BF and Tabi scream, it could be loud as well!

Girlfriend: I wanted to tell you I’m inviting you with me to a restaurant!

Girlfriend: Well, my father’s friend invited me for some reason.

Girlfriend: I wonder how he knew...

Girlfriend: Anyways! I wanted to take you aswell. I want ya’ll to meet each other already He’s my uncle!

Girlfriend: Great, then I’m going to call for a taxi.

(So they went to the restaurant to meet Girlfriend’s uncle)

Girlfriend: Hey Boyfriend, I need to go to the bathroom, wait for me here.

Girlfriend: Ahah! Okay, okay! You can escort me there, my love.

Girlfriend: I love you too!

(Tabi looks up. He leans away from the wall, and gets a glow in his eye)

Tabi: So, we finally meet after 1 year of hiding.

Tabi: So you already started dating another guy, yet another victim, huh?

Tabi: Listen dude, this is my battle, not yours. Just let me end this all! Leave!

Tabi: You do realize she is just using you, right?

Tabi: Gh… How do you not understand that she is just using you for her own success?

Tabi: Like she used me once, now look who I am, just a floating skull with an invisible body, I’ve lost everything!

Tabi: This is your last chance to leave, I-I won't stop until I get my hands on that little brat! Leave now or face the consequences!

Tabi: Very well then. I didn’t want it to end this way, but I guess I will just kill the both of you!

Tabi: Hehehe… so, you survived the explosion, huh?

Tabi: You think I’m stupid? I knew you would bring someone with you, but him?!

Tabi: I DON’T CARE ANYMORE! I WILL KILL HER HERE AND NOW NO MATTER WHAT!!!

Tabi: JUST TO MAKE THAT PIECE OF CRAP SHE CALLS HER FATHER FEEL PAIN 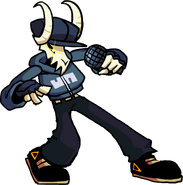 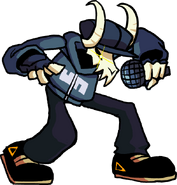 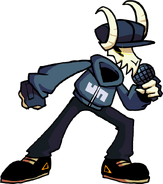 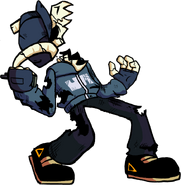 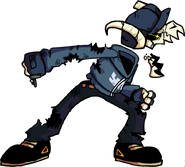 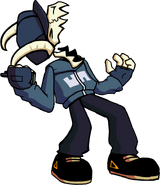 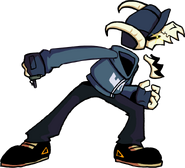 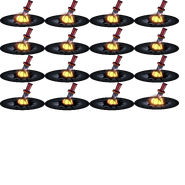 A sprite sheet for the heart on the title screen.

Tabi's neutral icon for My Battle and Last Chance.

The icon grid for the VS. Tabi mod.

Menu Art for the Freeplay mode.

Tabi's normal background for My Battle and Last Chance.

Ditto, but with fire (PNG Edition). 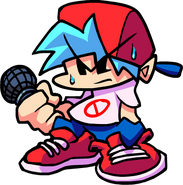 Boyfriend during My Battle and Last Chance. 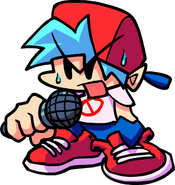 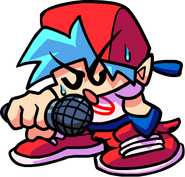 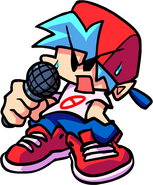 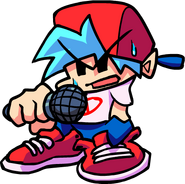 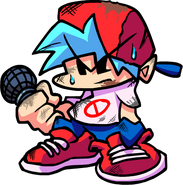 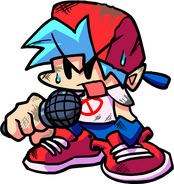 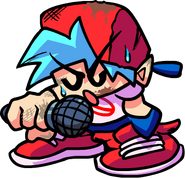 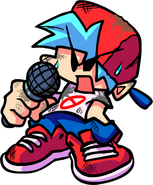 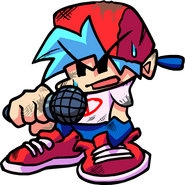 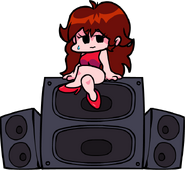 Girlfriend during My Battle and Last Chance.

The cutscene that plays before My Battle.

Game Over Screen in Genocide. 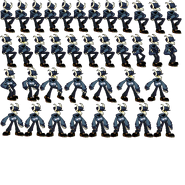 Tabi as he appears in the campaign menu UI. 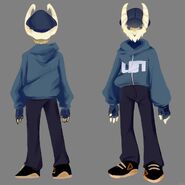 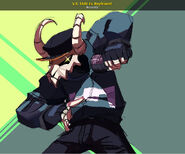 Art of Tabi, can be seen in the embed section on the GameBanana page. 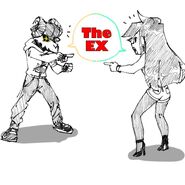 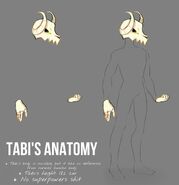 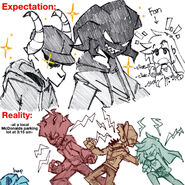 Tabi wearing a bisexual pride sweater while blushing.Artwork by ShizaSeiko.

A official minus version of Tabi.[23] 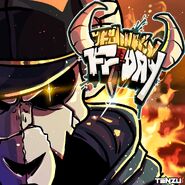 The mod's artwork from GameBanana.