Funkipedia Mods Wiki
Register
Don't have an account?
Sign In
Advertisement
in: Controversial, Unfinished pages and stubs, Characters,
and 7 more

He is basically as the normal Boyfriend, with spiky cyan hair, a red cap, baggy pants, a white shirt with a red prohibition sign, etc. However, he now has some new piercings. He also has a bandaid on his arm (shown in one of the banners for the mod).

A banner for the mod

Another banner for the mod 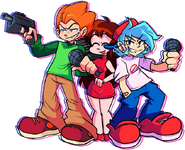 Tall Pico, Tall Gf and Tall BF as seen in the title screen