Funkipedia Mods Wiki
Register
Don't have an account?
Sign In
Advertisement
in: Unfinished pages and stubs, Characters, Whitty,
and 6 more

Not to be confused with Tall Bf (BossSwagMaster).

Tall Boyfriend is a reskin of Whitty.

Just like the normal Boyfriend, Tall Boyfriend has cyan colored hair, albeit he wears a white long sleeve shirt instead of a t-shirt with a red prohibition sign on it, blue pants, red sneakers, and a backwards red and blue cap along with having the same proportions as Whitty, since Tall Boyfriend technically replaces Whitty's model. During Ballistic, the prohibition sign on his shirt gains a more melted look. 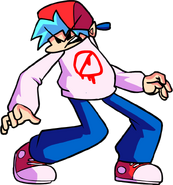 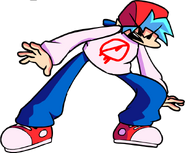