Let's end things off with a bang, Tari. - Garcello

Reason: This article contains major spoilers about the end of both Meta Runner Season 1 and 2, continue at your own risk.

Topic: SMG4 has dealt with pretty depressing themes, such as loss. Axol dies in WOTFI 2021.

Reason: SMG4 itself contains themes of depression, loss and a zombie apocalypse, and also contains two Story Arcs which include themes of mass murder, genocide, child murder and mass omnicide. And also the Eldritch Axol may be disturbing to some users, and not to mention the Genesis Arc

Reason: SMG4 as a series is known for Adult Jokes, in addition, there are a few Adult Jokes within Meta Runner as well.

Note: It's part for SMG4, In mod views was gained by SMG4: If Mario Was In Friday Night Funkin 2 video.[1]

Lucinia (Has part of her consciousness)

22 (In the Meta Runner Universe)

Younger than 22 (In the SMG4 Universe)

Turbo Artificial Rapid Intelligence, better known as Tari, is the main protagonist from the hit show "Meta Runner". She also appears in the web series "SMG4", as a side character. (the two are completely separate from each other and have their own lore).

Tari wears a blue and white hooded jacket over a white tank top with her Meta Runner symbol, brown khaki pants, white and blue socks, and brown flip flop sandals. She has blue hair (with a fringe covering her right eye), blue eyebrows (as of Season 2 of Meta Runner) and purple eys. Her appearance resembles the Blue Jay Bird. In particular, her symbol and the designs on her jacket's shoulders resemble wings. She has a robotic left arm that is called the Meta Runner arm, which allows the user to become incredibly skilled at any video game they play.

Despite the nature of reskin mods, the mod Tari comes from contains 3 tracks, two that involved Sunset Paradise's FNF video (and have Daddy Dearest as the opponent due to Meggy and the Funky Fource not being made because of the animated nature of Sunset Paradise). However, Tari and Belle come with a new track Running, a Remix of Meta Runner's S1 Title Theme. They replace all of Week 1. 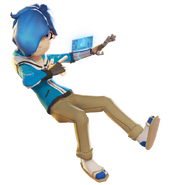 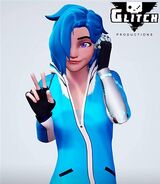 Tari as Seen in Meta Runner