Reason: They are mainly an amalgamate and are similar to BGfriend. Their look may be disturbing to people.

The Spookalgamate is a somewhat grotesque version of Skid and Pump, who appear to have melted into each other. Both are missing their legs, as from their waists down, their bodies have condensed into an inky sludge-like mass, with Skid mostly melting into Pump while the rest of him and Pump melts into a puddle on the floor. They also lack pupils, teeth, and tongues as well, and they are both perpetually smiling. Skid has a huge gash on his head that reaches to his right eye, his right arm appears to be much longer, and his left arm is stuck to Pump's head, while Pump seems to be drooling some sort of black substance. The microphone they share is now broken on top, similar to Skid's head.

Interestingly enough, they still do the Spooky Dance in their idle. 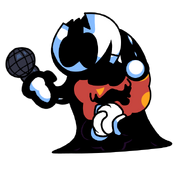 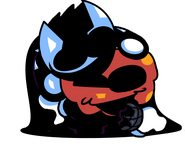 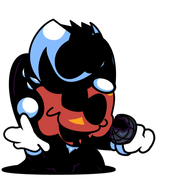 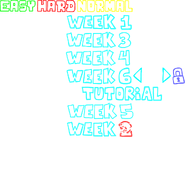 Week 2 bugged out seen in the Story mode

The altered UI that gets added

A sketch of The Spookmalgamates old design. 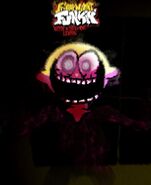 Old art for the scrapped mod The Spookmalgamate was originally used for.

An old sketch of the of The Spookmalgamates modern form. Pump’s head seems to be smashed open. Skid’s hand is melting as well, and his left eye seems to be slightly shut