Funkipedia Mods Wiki
Register
Don't have an account?
Sign In
Advertisement
in: Pages with low quality files, Candidates for deletion, Characters,
and 21 more

Issues Present: Tom's 'Normal' pose has got white edges around it. Please make it higher quality. Also, some of his animated poses do too.

This article has been nominated for removal! Its deletion from the Funkipedia Mods Wiki may be due to it being either vandalism, a duplicate of an already existing page or for cleanup.

Reason: The mod is set to be remade and merged with the Vs. Eddsworld Mod Series

Watermelon(Father in 25ft Under the Seat)

Were you looking for The Legacy Version Of Tom?

Tom is one on the main characters of Eddsworld. His mod acts as a reskin for the Legacy Edition Tord mod with the vocals edited to be a lower pitch of bbpanzu's tord voice.

Tom is a human with long, spiky beige hair, and empty, black eyes. He wears a blue hoodie over a dark grey top, grey pants and a pair of checkered shoes. He wields his microphone with his left hand and holds a hip flask full of vodka on the right, which he is almost always seen drinking from.

In his Monster form, he turns into a giant, cyclops beast with purple striped horns, violet, rabbit-like ears, a pointy tail, sharp claws and a pair of bipedal paws as legs.

Note: All of these cameos are not canon to Eddsworld's or Tom's story. 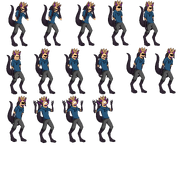