Reason: The old background for Warning would occasionally flash white due to the thunderstorm.

There are two free online apps you can use instead of that filthy MSPaint. These include Photopea for photoshop/cropping Assets, and Kapwing for merging instrumentals and vocals. - Tip regarding Software

Issues Present: Prom's appearance to be appears with his glowing mic appears non-transparent.

Vs Javarehab (As a cameo)

You and your hot girlfriend are out for a walk when suddenly a Tree shows up out of nowhere! Oh no! It wants your girl! The only possible way to prevent this is with a rap battle!

Nothing much has changed about Tree's base appearance, except for a slightly more realistic looking trunk.

Their mad form now has a single red eye with a dark sclera, and Tree strangely grows more roots as well and is notably withering, with it's wood turning darker rather than lighter.

Their super mad form also has the single eye as well as extra roots, and Tree's wood turns into a completely blood red hue. Also In this phase, Tree breaks the mic in half, but still manages to hold it, albeit without a hand like before and rather still floating. It also still sports the mouth, but now in a way more jagged fashion. Lastly, the leaves are now a very dark hue of red rather than turning completely black.

Tree is, well, a tree. It has the stereotypical appearance, brown wood with green leaves. It also has a mouth and a microphone that appears to be floating somehow.

In its mad form, its wood turns into a lighter brown and its leaves turn red. it now also has visible red glowing eyes.

In its super mad form, Its wood appears even lighter and its leaves are now fully black. It now has a much more evil appearance, with bigger eyes and a big red mouth. It also now has bruises all over its body and an actual hand (though still floating).

During all of Tree's songs, the HUD will constantly shrink down in size for each note before reverting back to normal. The chart will also start to move around left and right. The screen will also start shaking in certain parts of the songs.

During Revolution, the spacing between each arrow will drastically move apart. Eventually, the Tree's song chart will disappear, making it harder for the player to see what the next pattern will be. The health bar will disappear at the same time Tree's chart disappears.

Note: None of these cameos is canon to tree's story.

Reason: The songs are very bass-boosted and loud. You may want to turn your volume down.

Tree: Well well well, what a cute girl ya got there bud!

Tree: Eh, how about a rap battle for her?

Girlfriend: BF, let's get out of here.

Tree: I won't let you get away. Not like this.

Girlfriend: is.. is he dead?

Tree: Instead, you've killed me.

Tree: Forget getting your girl.

Tree: I'm technically dead anyways, thanks to you.

Tree: Besides... I have a hour left before I rot for your piss...

Girlfriend: Boyfriend, let's get out of here!

Tree: There's no escaping me...

Tree: I WILL RIP OUT YOUR SPINAL CORD!

Tree:HIYA BITCHES WETTY TA LOOK DIED? you be delet ya know ya be fooked of cuz of saying dat fook memes. we disfuck memes you DEAD YOU BE-EST. Ya say bepies? well. I AM maddest. ad VOCK YEAH!!!!

Tree Oh come on, how about we rap for her!

Girlfriend: bf let's get out of here

Tree: i won't let you get away

Tree: I WILL RIP OUT YOUR SPINAL CORD! 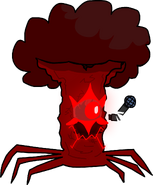 Tree and Javarehab in Prom

Ditto but Javarehab is fully visible