Reason: The outdated story of Updike contains saddening themes. He constantly tries to hunt down Whitty which gives him tremendous amount of anxiety and stress. Updike also feels sympathy for Whitty even if he is hunting him down.

This page is out of date, which means the mod has either released or received the long-awaited update. Remove this template only when at least more than half of the new content is present on the page.
Don't forget to always check social media in case more trivia has been posted.

Reason: The creator of Updike and Whitty separated them. Now Updike has in his own story, which Whitty is not involved.

I only redecorated my throne room to my own liking. - Roro

Reason: He used to be a part of the Whitty mod. The second most popular Friday Night Funkin' mod to date.

“It's for the greater good.”
― Updike


Gabriel Updike, or just simply Updike, is a character created by sock.clip.

Updike debuted as a secret character in the Vs. Whitty mod. However, due to sock.clip now wishing to keep Whitty and Updike seperate, Updike is no longer canon to Whitty's lore. Therefore, some information on this page is no longer accurate.

Updike is a humanoid, with white curly hair resembling the shape of cloud. He has prominent curled-up bangs which resemble a unibrow to some extent. He wears a white long-sleeved button-up shirt, a white partially buttoned-up jacket with four dark grey buttons on the front, white long-legged pants, a dark grey tie, and white shoes. He also wears a black glove and holds a microphone in his right hand, while his left hand is on his back. In his dark form, he is shown with mostly inverted colours, and his eyes disappear.

It is unknown how Updike was born or how he came into existence.

Updike was originally a wealthy weatherman, but he would later become a leader of a highly specialized taskforce that would hunt down various monsters. Due to Whitty - a science experiment - being a doomsday machine that could blow up an entire city, Updike and the taskforce consider him as a monster, too; as a result, they would try to track him down and kill him (much to Whitty's anxiety). Despite these intentions, he isn't a cold-hearted killer, and would feel sad about some problems of his own.

Note: All of these cameos are not canon to Updike's story. 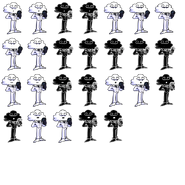 Boyfriend in the dark (Old) 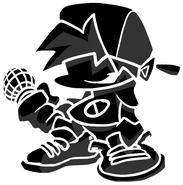 Boyfriend in the dark (Old)

Boyfriend in the dark (animated) (Old) 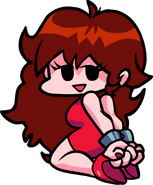 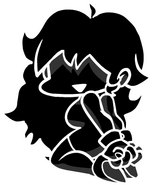 Girlfriend in the dark (Old) 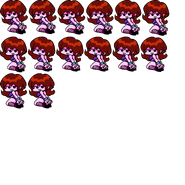 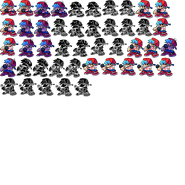 An (outdated) drawing of Updike and Whitty's relationship