Reason: Lia is literally a serial killer. Mia's intoxicated and drugged state may also be a little unnerving, and Kia's pupils disappear in her last song.Also, Anthems icon will likely unsettle some people. Also covers drug abuse and BF's chest being cut open.

Reason: Hubris has A LOT of aggressive screen shaking.

Reason: GIFS for Boyfriend's animations preceding the first half of Smol.

Amazing in my eyes if I say so myself! - Sketchy (Redrawn)

Note: The Original and Remaster combined have 302.4k views and 310 likes.

V.S. NekoFreak is a mod created by Hamillun featuring the unused characters found in Mommy Mearest's files. This mod takes place a few months before Boyfriend met Girlfriend, and so he tries finding a new date using the dating app Qinder to find a girlfriend but fails badly.

Not to be confused with Stalker Girl.

“You're not done already, are you? (Beeping) *Slices boyfriend in his chest* Hahaha! Did I hurt you?”
― Lia, GTFO


Lia is the first opponent for the mod. At first, she seems like a nice girl getting ready for her date with Boyfriend, but things go wrong extremely quickly after their first duet.

Lia appears as a young woman with long, straight black hair that covers the left part of her face. She wears a grey beanie, a beige sweater, black leggings and brown boots.

During Red Flag, she now wears a soft-yellow cat onesie with black stripes and light brown shoes. She also wields a knife on her right hand, and swings it around throughout the song. During GTFO, she is covered in blood after cutting her knife on Boyfriend's chest, her animations in GTFO are slightly more twitchy than her anims on Red Flag. 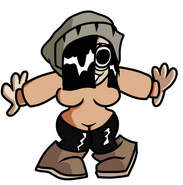 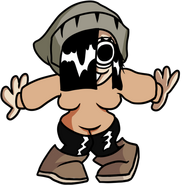 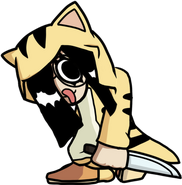 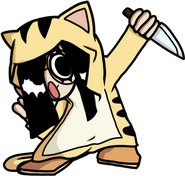 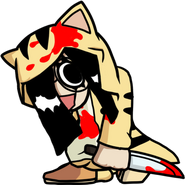 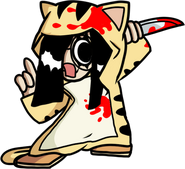 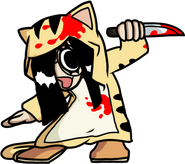 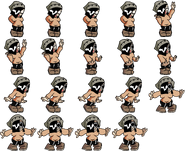 Mia is the second antagonist of the Nekofreak mod. After the fiasco with Lia, Boyfriend tries to find another date with Mia. However, before their date, Mia accidentally took speed instead of her usual anti-depressants, and now she seems to be going out of control.

Mia appears as a girl with long, messy auburn hair, and drool coming out of her mouth with a crazy smile. She wears a pair of pointy glasses, a maroon sweater and black boots with white soles. When her drug abuse takes effect, Mia's eyes "glaze out", becoming nothing but white, and she eventually creates afterimages.

Not to be confused with Kai.

Kia is the last antagonist in the Nekofreak mod. Before deleting Qinder for good, Boyfriend decides to date Kia. But he soon finds out about her unpleasant personality after she turns their duet into a competition.

Kia appears as a small catgirl who has long grey hair and a pair of cat ears of the same colors. She doesn't appear to have any hands, only a pair of stubby arms. She wears a reddish-brown shirt and black boots with fur on them. In Hubris, her eyes turn white and she turns into different hues to correspond with the arrows. 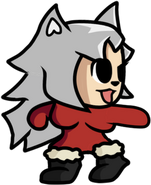 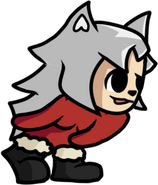 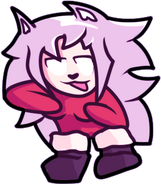 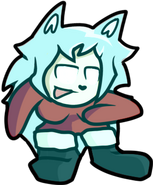 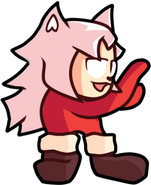 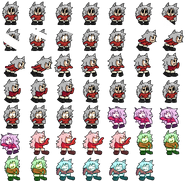 Anthem is a joke character hidden in the mod. He only has one "song", that being 610.

Reason: The voice in 610 is kind of bad quality, making it loud.

Note: Datura Dynamo has no dialogue.

Lia: Hey! Go ahead and get comfortable, I'm just cleaning up some stuff.

Lia: You're here a little earlier than you said you'd be so I'm not done yet.

Lia: Yeah, I'm not really the outdoorsy type, I usually do most of my dates here.

Lia: Thanks for understanding. :)

Lia: I know it sounded weird over text, but you get the gist of my standards.

Lia: If you can best me in a song, then you're the one for me!

Lia: Someone's confident! Alright handsome, let's see what you got!

Lia: Not what you were expecting when I said I was slipping into something more comfortable?

Lia: What's important is that since you've passed the test...

Lia: I have to make sure our feelings are mutual!

Lia: Can't have you leaving with vocals like that!

Lia: Don't worry, it'll be fun! Let's go another round!

Lia: It's been forever since I've stumbled across someone of your talent!

Lia: Last guy a couple of hours ago didn't even make it past the kitchen test, disgusting.

Boyfriend: Bayloop (I need to leave)

Lia: You're fidgeting like crazy over there, hey tell you what.

Lia: Since you're the first in awhile to impress me this well...

Lia: I'll give you a ten second head start to run if you win.

Mia: Still got some broken glass over there from last week.

Mia: Place is a mess but like an unorganized-organized type of mess you know?

Mia: OH, almost forgot, you said you like singing right?

Mia: I got an instrumental leak from a friend earlier this week, wanna try over that?

Mia: You mind if I confess something, and promise to not get mad?

Mia: I was getting kinda nevous before you showed up, given the whole mess deal...

Mia: So to calm down, I took some depressants before you got here.

Mia: Small problem, I think I mixed up my depressants with speed.

Mia: It's not the first time this has happened, but GOD.

Mia: This time somethings off... Might have really done it this time...

Mia: I should be fine, if my eyes start glazing over though that's probably bad.

Mia: Let's just start the next one, I have another instrumental lined up.

Kia: So you're the new guy on the rise?

Kia: Weird you're trying to make a move on competition but aight.

Kia: You're in my apartment, it don't matter what go down here since no one gonna see it.

Kia: Let's see who the better vocalist is.

Kia: Why are you looking at me like that? You won. (Not by much.)

Kia: Boo hoo, are you really getting pissy about me singing during your turn?

Kia: Not my fault your vocals were so bland I had to start ad libbing.

Kia: Don't care, moving on to the next song.

Kia: If you got such a problem with my style, do something about it shortstack.

Boyfriend: (This was supposed to be a date, you turned it into a competition.)

Kia: It really don't matter, your chances of making it are shorter than your height.

Boyfriend: You are not the one to be making height jabs.

Kia: I got him to stop beeping, no turning back now.

Kia: Used to have an ex, weirdo college dropout who does PI work now or something.

Kia: The one good thing to come from our time together-

Kia: was this one trick he taught me.

Kia: You ain't gonna make it in the music scene-

Kia: You ain't gonna make it out this building.

Boyfriend in the first phase. 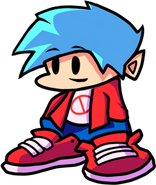 Boyfriend in the second phase. 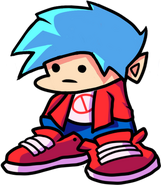 Boyfriend in the third phase. 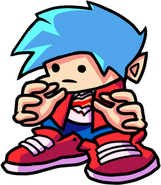 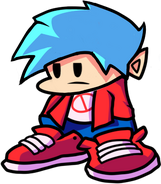 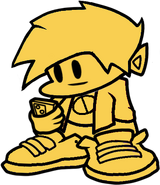 Boyfriend scrolling through his phone in the Story Mode menu 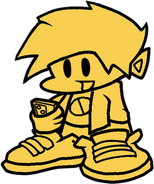 Boyfriend looking at the screen when you select a week 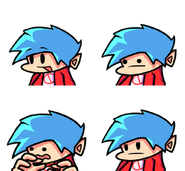 The Background in Smol