Funkipedia Mods Wiki
Register
Don't have an account?
Sign In
Advertisement
in: Characters, Pages with copyrighted assets, Spoilers,
and 24 more

That's very unholy of you! - Sarvente

Reason: Jenny comes from My Life As A Teenage Robot, which is owned by Nickelodeon and Paramount Global.

Let's end things off with a bang, VS. Jenny. - Garcello

Reason: Spoilers for her show "My Life As A Teenage Robot"

Reason: The mod has been updated! With many new forms of Jenny (including Minus Doll and Normal), new opponents (Vexus), and new mechanics and songs. Time to add them all here!

Reason: 17k bytes and the background is still missing!

Special Thanks: Rob Rensetti (My Life As a Teenage Robot creator)
IagoAnims (Minus Mod creator)

Vs. Jenny is a mod created by Klade250 which adds Jenny Wakeman, a teenage robot from My Life as a Teenage Robot, into the world of Friday Night Funkin' where she meets both BF and GF in her place and they rap battle, with everyone in her neighborhood excited, not unless some beef happens, thanks to Vexus.

15 (physically), 5 (chronologically, as she was built five years before the show's timeline)

Jennifer "Jenny" Wakeman, or also known as XJ-9 is the robot with personality of a teenage girl from My Life as a Teenage Robot. She was created by Dr. Nora Wakeman to protect the planet Earth, but desires to live the life of a normal teenager.

Jenny is a teenage robot with blue "pigtails" with bolts connecting them to her head that can act as rocket boosters, blue "bangs", white skin, blue "clothes" (a crop top, a miniskirt, and boots), a belly-bolt (a bolt that simulates a belly button) which doubles as a linchpin, hands with 4 fingers each and center holes, a "false nose". Jenny has no ears, instead possessing an auditory system "decades ahead of its time".

In Boltcatcher, she now has 3 face bolts on her head, her shoulders becomes speakers, and doesn't stand on a TV anymore. She has an anger expression when she sings.

In Manipulated, she is tinted green as she flies in space. She attains her 3 bolts on her head.

In Giga, she becomes assimilated by Vexus and transforms into her monster form, where her body becomes bulky and large, possessing a large head with face bolts, small ponytails and red eyes, large arms and legs full of wires, a small torn skirt, and a large chest plate with 3 white spots on each side.

In Descendance, she appears as she normally is with the exception of a torn out hole with exposed wiring in her abdomen.

In Malfunction, she is now wearing a prototype of an Exo-Skin with half of her face, right arm, and right leg still exposed. She now has a scared expression when she sings. 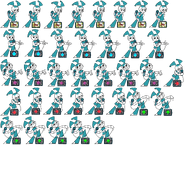 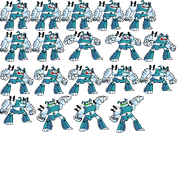 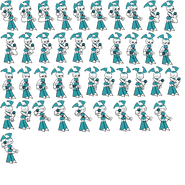 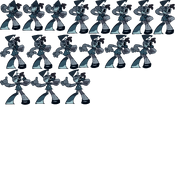 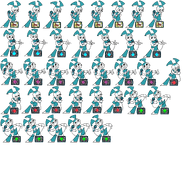 15 (physically), 5 (chronologically, as she was built five years before the show's timeline)

Minus Jenny is the minus version of Jenny who appears in Week 2 who has two forms, her normal, and her ghost form based on her Malfunction icon. In her normal form, she is shown as a city frolicking android as Mean BF and GF find her in a futuristic city and rap in the air. Later however, she appears as a ghost sprouting from a television in a distressed manner.

Minus Jenny is the minus version of Jenny where she wears a wholly different outfit and is a seemingly better android. Her body is blue with big white eyes, smaller pigtails, two fingered robotic hands, and screw-like joints on her legs. Her street outfit is yellow with grey and white accents, consisting of a short hoodie, shorts, and sneakers with a yellow cloth on them.

In Disconnected, she becomes a ghostly android partially exiting from a television. Half of her face is blue and the other metal gray like her icon. The robotic half of her face has a grey zipper, a jagged mouth, and a broken eye socket. Her arms and upper half are black and large, with hands ending in claws. Below her black upper half is a blue torso. 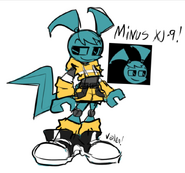 Original sketch for Minus Jenny by valengarfy on Twitter. 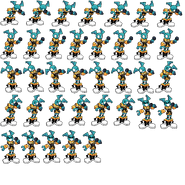 Note: Giga Jenny uses Boltcatcher's icons, so a fanmade icon made by Zabbybaby will be used instead.

Jenny: Who are you?

Jenny: Huh? What's this mic for?

Jenny: How does that even work? How can you LOSE when singing?!?

Jenny: Can you stop speaking in stupid beeps? You're not a robot! Speak English!

Jenny: What’s even happening? Why are we battling?

Nora: JENNY! You’re off school, you should come home! I am worried about you.

Jenny: Alright. Let’s do this.

Jenny: UGH! Why can’t I win? This is so STUPID.

Nora: JENNY! Don’t turn me off next time. Tremorton needs your protection, Vexus is attacking from space!

Jenny: Yeah, yeah, whatever mom. I got it.

Vexus: Jenny Wakeman. Again, you come to intercept me. You can’t cause any change this time! I have already begun my plan-

Jenny: No time for me to hear about your PLAN. I want revenge on that blue haired jerk back on Earth!

Jenny: I want to battle a different way this time. With the power of singing.

Vexus: That’s laughable, what do you think this will achieve?

Vexus: Very well. I’ll play this childish game of yours, I am guaranteed to win regardless.

Jenny: There! I won! Now, leave Earth. I beat you fair and square.

Vexus: Who said that singing battle guarantees you beat me? I was simply passing the time. Do you wish to become part of the cluster?

Jenny: What do you mea-

Vexus: You are now under my control.

Vexus: Ah yes, she mentioned a blue haired individual. Prepare for your assimilation!

Vexus: This doesn't make sense . . . beaten by the power of singing. No matter, I will be back

Jenny: Wow I didn't think you could defeat her with that sort of power.

Jenny: Now I owe you a battle myself. But, I'm not going easy on you.

Jenny: Let's do this! 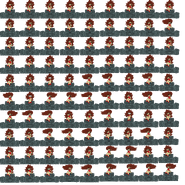 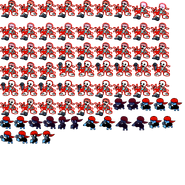 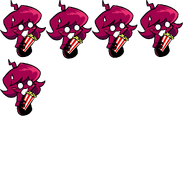 GF Minus During Disconnected 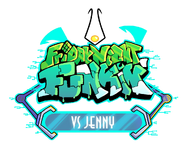 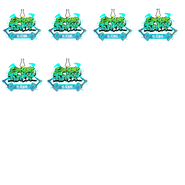 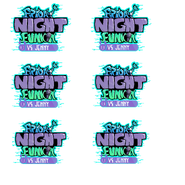 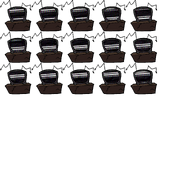