Reason: Mr. Game & Watch, with the Flatzone song being from Nintendo. There's also Pyoro who originates from WarioWare.

Reason: Kapi is quite a popular mod. This is also the 6th most downloaded mod on GameBanana.

Reason: We need: Animated and static poses for guest 71, and pretty much everything for pig.

VS. Kapi: Arcade Showdown is a mod by PaperKitty that adds 3 new weeks, new opponents, and a bunch of new songs. The main focus of the mod is of the character, Kapi.

VS Kapi: Arcade Showdown
Times & Tribulations (Vs. Omega)
Night of the Funky Bot

Kapi is a character designed by PaperKitty and is the main "antagonist" of VS. Kapi: Arcade Showdown. His week comes with 4 songs; those of which are Wocky, Beathoven, Hairball, and Nyaw. He also has an unused song called Fuzzy Distortion

Kapi is a grey-furred anthropomorphic cat with long grey hair that he ties back into a ponytail, and combs forward to his left. He has big bushy eyebrows, eyes that reflect light, a small button nose, 3 freckles on both cheeks, and a single sharp tooth poking out of the corner of his mouth. He also sports 2 long spiky whiskers on either side of his face and three piercings on his right ear.

He wears a reddish-pink, blue and yellow hoodie with hanging strings, dark grey pants and a pair of blue and dark grey shoes with white accents. He stands on a typical DDR pad with a red handle bar and greyish base, the Up and Down arrows are colored blue and the Left and Right arrows are colored pink

In his third song, Hairball, he is angry and his poses have symbols. His down pose has a lightning bolt, his left pose has an anger symbol, his up pose has sweat, and his right pose has dark lines.

In his 4th song, Nyaw, Kapi is no longer angry.

The remaster gave Kapi a red cap with a black visor, a jacket instead of a hoodie, a new belt (which appears to be a little too big for him, as it has a lot of slack on Kapi's left), and slightly enhanced shoe accents. Kapi's hair is not combed over to one side anymore, instead covering his entire forehead. He also has shorter, rounder whiskers and a slight blush(?) behind his freckles. His mouth is also slightly more "cat-like" now, and his tooth is smaller.

His DDR pad will also get a touch-up with 2 fashionable stickers, one showing a white silhouette of a pair of cherries within a pink circle, and the other showing unintelligible text that contains a star behind the upper left corner. The handlebar is slightly thicker, the metal holding the pad together is more noticeable, and the color-coded arrows are now a dull pink for Up and Down and green for Right (and presumably Left, although it is currently not visible behind Kapi's legs) 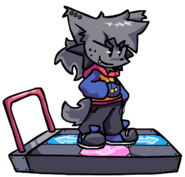 Kapi looking at the screen right before the blackout at the end of Nyaw. 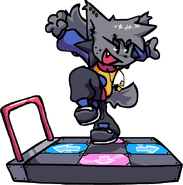 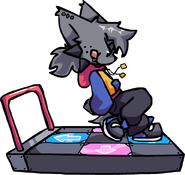 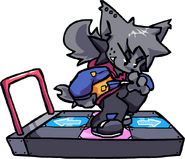 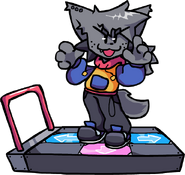 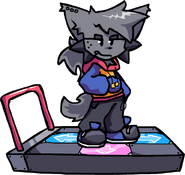 Kapi's looking at the screen before the blackout but Static (Removed) 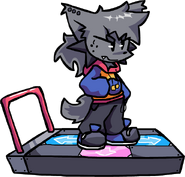 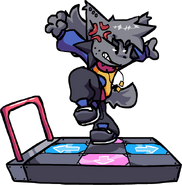 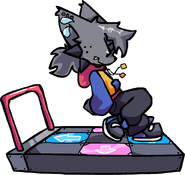 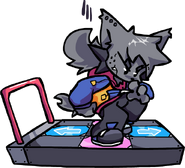 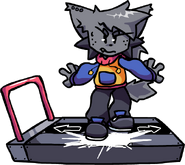 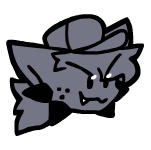 
Pyoro is a small bird character from a fictional video game that appeared in the WarioWare series. They are the playable character during their titular song.

Pyoro is a small round bird with red feathers, a white underbelly, a yellow beak, and small legs.

The Pig(?) is a character based on a game that PaperKitty made in Roblox. They don't actually make a physical appearance anywhere and are instead the texture of the game's floor.

The Pig is a cut-out bouncing image of a Print Your Own Pig[7] created by a Facebook user. Pre-Sanctuary, it first appears as a black blob with teeth and eyes and later shifts into the Pig. 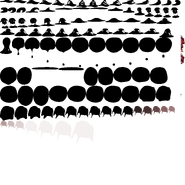 “...”
― Roblox Guests aren't given the ability to say anything.


Guest 71 is a character from Roblox being an secret playable character in the song "Sanctuary".

The average classic male Guest has a dark sweater along with black pants, along with having a little Roblox cap on his head. They have a smile along with the name "Roblox" on his sweater, and a health bar over their head with their name above it just like one would in Roblox.

Ball (As a juggler)
Super Smash Bros. Melee (As Mr. Game and Watch)

Mr. Game & Watch is a character from the Super Smash Bros. series, within which he represents the Game & Watch series of games. He is also the tertiary opponent in the V.S Kapi Mod, where you (in V1) fought him in the week G&W after completing Vs. Kapi.

His only song is Flatzone, a remix of "Flat Zone 2" from Super Smash Bros Brawl.

Mr. Game & Watch has a very simple design, being pitch-black in color with a light grey outline. He has a circular head with a big nose. Unlike in the Super Smash Bros series (with the slight exception of the Flagman move), he occasionally smiles, with his mouth being completely white on the inside. His torso is shaped like a teardrop and he has skinny limbs with round hands and feet. He has no eyes or ears. 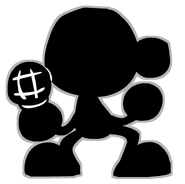 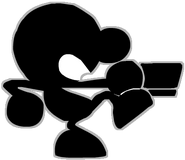 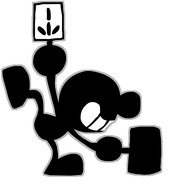 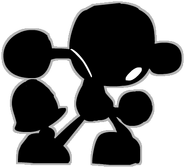 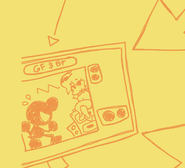 Part of the VS Kapi background which depicts Mr. Game & Watch and Girlfriend. 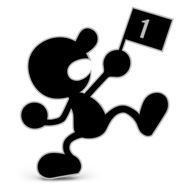 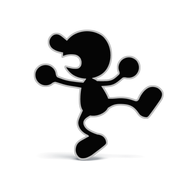 Note: Very few of these cameos are canon to Kapi or Mr. Game and Watch's story. Those that are will be stated in their respective "appears in" section on their infobox.

Note: These cutscenes have been removed in the V2 update. Plus, Flatzone has no dialogue.

Girlfriend: Not bad for a cat!

Boyfriend: That literally means nothing.

Kapi: Sure. Let's just move on.

(Kapi stomps on his dancepad's right arrow key, accidently breaking it in the process)

Kapi: C'mon. I obviously beat you.

Kapi: My dance-pad took quite the damage.

Kapi: I should probably cool down quite a little.

Girlfriend: This is entertaining!

Kapi: And the arcade is closing soon.

Boyfriend: How about one more song, Kapi.

Kapi: Hopefully I can impress her this time.

Kapi: No holding back!

Girlfriend: Not too bad!

Kapi: See what did I tell ya!

Boyfriend: That literally means nothing

Kapi: Sure. Let's just finish this... 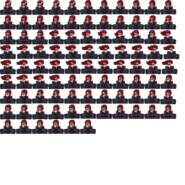 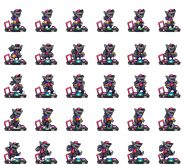 Background of his stage used in Wocky and Beathoven (Old)

Background of his stage used in Hairball and Nyaw (Old)

Boyfriend Game over only kapi and gf image

The old art of the VS Kapi Week [Arcade Showdown]

The new art of the VS Kapi Week [Arcade Showdown] 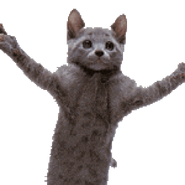 The application icon for the mod (Might be outdated)

An unused edit of the parents' icons, found in files. 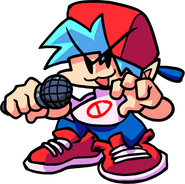 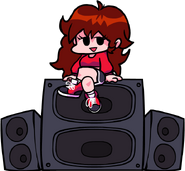 Skid and Pump in the background during Beathoven and Hairball.

The crowd that shows up during Nyaw. (Animated)

The crowd that shows up during Nyaw.

"AND THEN THERES THIS FUCKER.png", found within the game files, note the lack of ear piercings and the hair being combed to the incorrect side, as well as the jacket missing it's hanging strings and the shoes missing it's accents and flaps.