With all due respect, this establishment does not appear to be a Christian church of any kind. - Boyfriend

Reason: The webseries Suction Cup Man originates from contains multiple occurrences of dark humor, some sexual content and a lot of swears.

why u actin sus - Impostor

Note: It's Suction Cup Man, look at him go!

Mr. Suction (Trump)
Mr. Cup (Trump)
Mr. Man (Trump)
Heathen (Satan)
Mr. Cup Man (Judge)
Climber of the Year (Climb Magazine)
Man (himself for a while, what he was downgraded to after his suction cups were taken)
Penis Man (Himself, for a little while)
Cock (Business Guy)

Unknown (Possibly 19, due to the inspiration)


Friday Night Funkin’ (As a mod)

Suction Cup Man is a character created by Piemations and modded in by polaroid119. Inspired by a real life incident when a man decided to climb the Trump Tower with only suction cups, Piemations made this man. However, he doesn't climb for girls or money, he just climbs because it's "fucking funny". His words, not ours.

Suction Cup Man wears a purple shirt, with a blue bicycle helmet, a dark blue backpack with gray straps, his signature red suction cups, and black shoes. He has brown hair, black eyes, and has a stubble for a beard.

Note: All of these cameos are not canon to Suction Cup Man's story.

All this sudden distortion maxed out my Resonance. - Max Neon

This section contains very loud audio. If you are wearing headphones, beware!

Reason: Some songs are really loud.

Narrator: Boyfriend is walking through the business tower, when he hears the familiar sound of... suction cups.

Narrator: Boyfriend looks confused upon hearing this as he runs to the open window.

Boyfriend: Dude, what are you doing?!

Suction Cup Man: I'M CLIMBIN' YA TOWER WITH SUCTION CUPS, WHAT DO YOU THINK DUMBASS!?

Boyfriend: Uhhh, bro, you're kinda smudgin' the windows, and I don't wanna get beat up by double D today, so can you not?

Suction Cup Man: Ah... I said this so many times. I CANNOT GO DOWN, I CAN ONLY GO UP.

Suction Cup Man: I'M... not... even gonna explain. You kinda remind me of business dummy. I've been missing him since he went on vacation last fall!

Boyfriend: Well, I have nothing better to do, so how about a rap battle?

Narrator: Boyfriend tosses the mic to Suction Cup Man, who grabs it.

Suction Cup Man: Heh! I've never rapped before, but I'll give it a try! Mind if I make some random-ass noises?

Boyfriend: Eh-- no, not at all. I mostly rap with vowels, beeps, and sometimes Windows Blue Screen errors.

Boyfriend: It's nothing, let's just get to it now.

Boyfriend: Yeah, you did good for your first time!

Suction Cup Man: Well technically I did sing my own theme song but that doesn't really count 'cause I didn't write that.

Suction Cup Man: By the way, who was that "Double D" guy you were talking about anyway?

Boyfriend: He's my Girlfriend's dad. He told me to protect this tower for some reason. He's also an ex rockstar, which is interesting.

Boyfriend: He seems to have something against me, he keeps hiring this people to mess with me in some way, as if to prove a point.

Suction Cup Man: Hey wait a second... Are you that guy I was hired to annoy the shit outta?

Suction Cup Man: Well in that case, I guess I'll pick up the difficulty a bit!

Suction Cup Man: See if you can keep up you eminem wannabe!

Boyfriend: Oh it's on!

Suction Cup Man: Nice, you actually kept up, but I ain't slowin down now!

Suction Cup Man: If you want hard, I'll give you hard!

Narrator: Suddenly, Mr. Guy Business on his left opens the window next to Suction Cup Man. Leaving both of them expressionless.

Mr.Guy Business: I knew it, you piece of shit!

Suction Cup Man: Wait what!? I thought you went on vacation!

Mr.Guy Business: I just wanted to catch you in the act! I just KNEW I couldn't trust you!

Mr.Guy Business: Get the f*ck off of my tower or else I'll use the window cleaner again!

Boyfriend: What is going on?

Suction Cup Man: Whatever, let's do this last song and be done with it.

Narrator: One day, Kim-Jong-Un plans to bomb America, but Suction Cup Man is climbing on his missile.

Kim-Jong-Un: AYE! What the F*CK are you doing!?

Suction Cup Man: Climbin' your missile with suctions cups dumbass, what do YOU think?

Suction Cup Man: Why not your missile?

Kim-Jong-Un: You're delaying my plans to bomb America!

Suction Cup Man: I'll delay your plans all I want, LOOK AT ME GO!

Narrator: Boyfriend randomly appears from nowhere at the missile with Suction Cup Man

Suction Cup Man: What the hell!? How did you get here?

Boyfriend: That doesn't matter, I want a rematch!

Suction Cup Man: But you won last time, didn't you?

Suction Cup Man: God damn it. FINE. We can have a rematch.

Suction Cup Man: Alright now f*ck off and let me deal with this missile!

Kim-Jong-Un: Wait, you're trying to DISARM it!?

Suction Cup Man: Yeah dumbass, what do you think I was trying to do!?

Kim-Jong-Un: Get off of my missile this INSTANT!

Boyfriend: We're not getting off 'till I get another rematch!

Suction Cup Man: WE LITERALLY JUST HAD A REMATCH!

Look At Me Go Dialogue

Screenshot of the gameplay in the trailer. 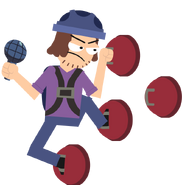 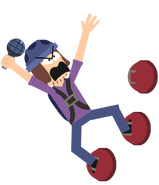 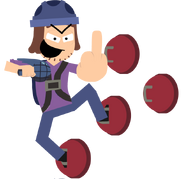 "Suction Cup Man" as he appears in troll demo, just being an edited version of Daddy Dearest. 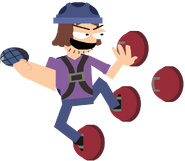 Suction Cup Man's smear frame, before the "ey!" animation. To the person who put this here, nice! 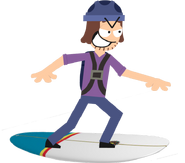 Suction Cup Man on a surfboard 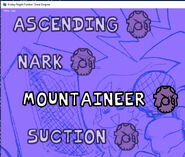 The real names for Week 2, posted by Noodle as a reply on the tweet made by Polaroid119

Boyfriend in a Tower 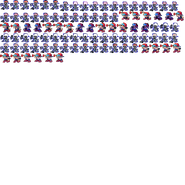 Boyfriend with a plunger. (Used on Week 2 of this mod)) 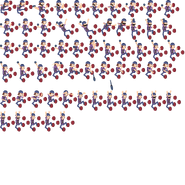