Adym S. Evans, better known online as verbalase, is an American hybrid singer, rapper, impressionist, sound effects and loop artist. He is best known for his popular series called "Cartoon Beatbox Battles". This page is about the guy, Verbal ASE, the beatboxer from Outerspace. The mod is created by Ani-Mike-Tions.

Verbal ASE has black skin and wears a white t-shirt with a simple drawing of his logo. He wears a red long sleeved shirt under the t-shirt. He wears black long sleeved pants, with red stripes on each side. with He has finger-less gloves, with a red backwards cap. He wears red sneakers with white on the bottom.

Note: All of these cameos are not canon to Verbalase's story: 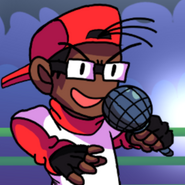 Mario Vs Sonic In FNF Style 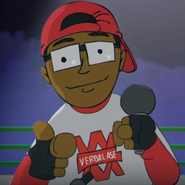 Verbalase in his original design