Reason: Beepie says: Rock me baby, is considered as a sexual innuendo.

Alright, just a couple of Vs. Beepie's songs, though. I don't know that many. - Shaggy

Reason: Ievan Polkka is copyrighted and was composed by Eino Kettunen, a Finnish song in 1930.

Reason: Boyfriend and Girlfriend's old sprites, Boyfriend's game over sprites and we need info’s of GF and BF.

Friday Night Funkin': Vs. Beepie, also known as Vs. Beepie BF Lover, is a mod made by valengarfy, starring Beepie, a fangirl who wishes to be with Boyfriend. It also adds new costumes for Boyfriend and Girlfriend. The mod adds 1 full week containing 5 new songs, as well as a new tutorial song.

Stalker, Together Forever & Mine

As Girlfriend welcomes the Anime Expo audience, she explains that Boyfriend is ready for a rap battle and wants any challenger to step forth and battle against him. Enter the fangirl known as Beepie, who gets up on the stage while rushing people down to be the first one delected. Girlfriend gets surprised and startled as she remembers a familar experience with a previous fangirl, which confuses Beepie because this is the first time they ever met. Refocusing her attention to Boyfriend, Beepie wants to fight for BF's love (and to make her fanfiction(s) come to reality), claiming that Girlfriend isn't the one for her. Boyfriend lets out some beeps and bops, which leads Beepie to believe that he's asking her hand in marriage. Girlfriend says that it's not what he said, but Beepie denies this, claiming that Boyfriend loves Beepie and that he wants to have 304 kids with her. This would ultimately lead to the first song to play. 30 seconds into the song, Beepie says "Rock me, baby~". After the song is finished, Beepie would be angered by her loss and would transform into her gargoyle form, which causes the entire Expo to explode. She's still set on stealing Boyfriend for herself and marrying him for eternity as she misinterprets his beeps and bops yet again. Girlfriend calls her out on it, but Beepie is still keen on being with BF forever as she wants her "sweetie" to "get ready". The second songs comes around, and Beepie is unsuccessful again. Girlfriend tells Beepie to give up as her efforts have become all too similar with a previous fangirl who failed to win over Boyfriend, minus the cruficiation part which gives GF a sigh of relief. Beepie snaps as the third song plays and she shoots fire all around the stage. Boyfriend ultimately defeats Beepie who transforms back to her human state and unveils her cyan hair actually being a wig, exposing her real cherry-colored hair out in the open. The now-saddened fangirl apologizes for her actions and even tells him about the wig. Girlfriend quickly reminds her that they're still surrounded by the fire, and Beepie transforms into her demon form again to help them escape.

That I Need & Its Ok

Somewhere outside, Boyfriend sits down with Beepie on the sidewalk to try and cheer her up. Beepie is still upset about herself due to what had happened as her insecurities start to show, but Boyfriend still tries to talk to her and make her feel better about herself, which leads to the fourth song. After that, Beepie finally calms down and bears a smile. Boyfriend is willing to make amends with her and now wants to be her friend, which she accepts. They would sing one last song to bury the hatchet and begin their new friendship.

The mod has received positive reviews by many fans, with some stating that it's a step-up to other "[crazy] fangirl/fanboy" mods that came before this. People applauded this mod for its music, artwork, story and other content that it managed to squeeze in. It also made people appreciate it even more when it's realized how much love and care went into this mod as it did all it can to provide one of the best fangirl mods today.

Beepie is the main "antagonist" of this mod. She is on a mission to steal Boyfriend away from Girlfriend and marry him. After the song "Stalker", she transforms into a gargoyle.

Beepie taking off her wig 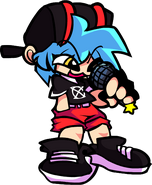 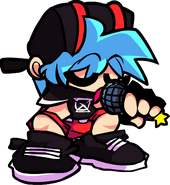 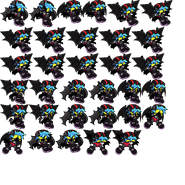 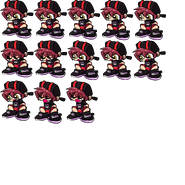 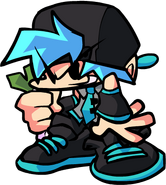 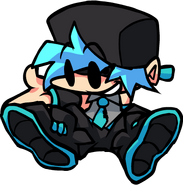 That I Need Static Idle

That I Need poses

That I Need left pose

That I Need down pose

That I Need up pose

That I Need right pose

That I Need miss poses

That I Need left miss pose

That I Need down miss pose

That I Need up miss pose

That I Need right miss pose 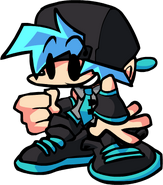 It's Okay down pose

It's Okay up pose

It's Okay down miss pose

It's Okay up miss pose 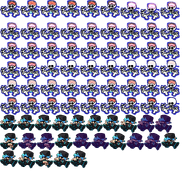 Boyfriend That I Need Sprite Sheet 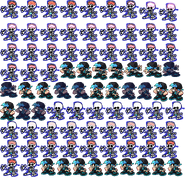 Various FNF and mod characters appear in the background. They include:

FNF and/or mod character(s) removed from the background:

*Note: The misspelling isn't unintentional. This is what is seen in the official dialogue.

Girlfriend: YOOO! GF here! Thank you all so much for the invitation! It's an honor to be here!

Girlfriend: what he means my dear BF is that we invite you to come and fight against him! who is willing to challenge him?

Beepie: YES, AFTER SO LONG I CAN BE WITH HIM!

Beepie: !!!!BF SENPAIIIII!!!! KYAAA I CAN'T BELIEVE YOU ARE MY ADORABLE LITTLE HUSBAND YOU ARE SO KAWAII IN PERSON HEHEHEHE 7w7

Girlfriend: Oh no, not you again.

Beepie: But this is the first time we meet

Girlfriend: oh, it's just that you look like somebody

Girlfriend: yeah, who the hell are you?

Beepie: the name is beepie, and im here to fight for bf's love! (...finally my origional fanfic will be real!..)

Beepie: BF, that stupid gf is not for you I'll be the one who really make you happy my senpai

Beepie: YES, I WILL MARRY YOU, I LOVE YOU TOO

Girlfriend: that's not what he said

Beepie: that's because you don't understand idiot, i do, he said he wants to be with me forever and get married and have 304 kids.

Beepie: Oh! that makes me so happy, I love you too my little bf!

Girlfriend: What, that's not what he said. Just go away fucking weird

Beepie: Shut up, You, You're trying to separate us

Girlfriend: Just give up

Girlfriend: You're same that that girl

Girlfriend: At least you didn't crucify me, so thank you

Beepie: You'll come with me my little bf

That I Need Dialogue

Beepie: Sorry my little bf, I guess I crossed the line

Beepie: This is my real hair

Beepie: I just was using a wig

Girlfriend: Just a remember about we're between the fire...

Beepie: Oh, don't worry, leave it to me

Beepie: but I made something terrible

Beepie: What do you mean?

Beepie: Im so happy, thank you

Beepie: Can we sing a last one? Pleaseee

Background during Together Forever and Mine.

Background during What I Need and Its Okay. 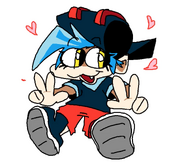 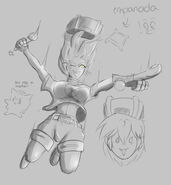 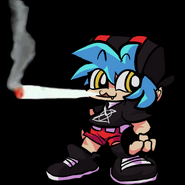 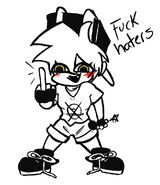 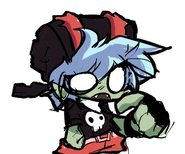 A sketch of Beepie as a zombie. 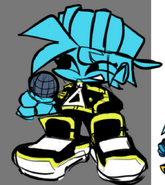 An official sketch of Minus Beepie.

A sketch of Minus Beepie and Mean Boyfriend. 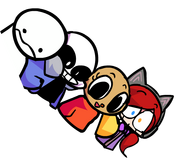 (From left to right) Bob, Sans, Pompom, and Coralie 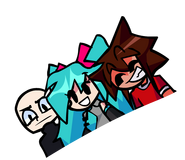 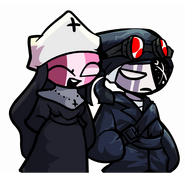 Annie (Dressed as Garcello) and Red Impostor (Vs. Impostor) 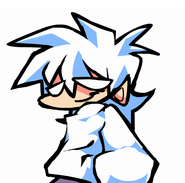