Reason: Flippy suffers from PTSD (Post Traumatic Stress Disorder), which may be depressing to some users/people. Also, the tone of Fallout (and parts of Slaughter) can hit hard.

Reason: Flippy comes from Happy Tree Friends, a gory show disguised as a children's cartoon rated TV-MA, and frightening & intense scenes on IDMB, [1] despite this, the show is rated TV-Y on YouTube (however, one episode was removed from Youtube due to themes related to suicide). In the mod, Fliqpy's icons have blood, and in Slaughter's background, blood and organs are seen. Also, KAPOW contains A LOT (and yes, we mean a LOT) of gore.

Shit can neva go right with you white Vs. Flippy: Full Metal!s around. - HD Darnell

Reason: The remaining assets that are NOT on this article:

The animator should got lazy for animating too much frames. - Yung Lixo

Reason: This mod is a demo, remember that, and keep it in mind. All the art is also being redone, since the old artist left.

READY FOR ROUND 2? - Sonic.EXE

Let's end things off with a bang, Vs. Flippy: Full Metal!. - Garcello

Not to be confused with Fallen Soldier

A good pc
Vs. Flippy: Full Metal! (previously Vs. Flippy: Flipped Out!) is a mod that contains different versions of [1], which runs on FPS+ (Psych Engine v0.5 in the upcoming update)[2]. The demo currently has 13 songs. (not counting "Two Trucks" and "Flugh")

In this mod, Boyfriend and Girlfriend go on a picnic in the forest. Then we see Flippy, Flaky and other friends playing hide and seek but Flippy lost his tags. So Flippy told his friends to help him find them.

While Flippy was still for looking it then he saw a butterfly, which landed on his index finger, causing him to brighten up. Suddenly, a loud sound is emitted due to Boyfriend trying to fix his microphone. This triggers Flippy's PTSD and Fliqpy takes over, confronting Boyfriend. However, it reveals that Fliqpy sees Boyfriend as a Blue Tiger Soldier instead. The battle ensues after Fliqpy whips his signature bowie knife out and laughs menacingly.

Want to learn more about Flippy and Fliqpy?

Flippy, or Fliqpy for that matter, is the main antagonist of the Happy Tree Friends TV show who has rare appearances, but makes a huge impact on the other main characters when he does appear. In every episode Fliqpy's in, he usually ends up killing most, if not all of the characters in traumatizing, but creative ways.

He appears to be a small green bear with yellow eyes wearing a military uniform, but in this version, he has an even more aggressive expression. His uniform is slightly different from his original design and his dog tags seem to be missing. He also seems to be wearing a pair of dark green pants as well. He is also holding a walkie-talkie in his left and a knife in his right. In Slaughter, he is now covered in blood, his mouth has widened, his pupils look more crazy, and he no longer wields a walkie-talkie. During Overkill, his eyes become black with red pupils, and he no longer wields a knife, leaving his hands empty. During Fallout, he has the same appearance that he did in Overkill, except Flippy is trying to regain control of his body and prevent himself from harming Boyfriend and Girlfriend.

Flippy, for the most part, is anything but predictable. As Flippy, he is a kind bear who is easily fascinated by his surroundings, such as a butterfly. However, whenever there is something that reminds him of the trauma he endured during the war, he flips to his alter ego, Fliqpy, who is a dark, blood-hungry individual who kills anything that moves in a brutal, yet creative way based on the surroundings. Despite this, he does not kill for kicks and giggles, because as Fliqpy, he is under the illusion that he is back in the war and is facing his enemies. 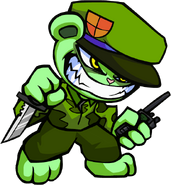 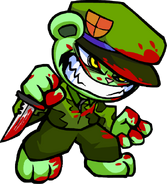 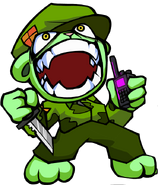 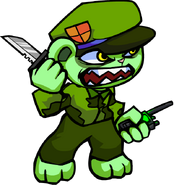 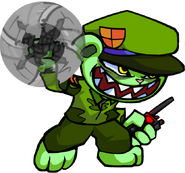 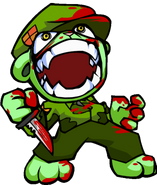 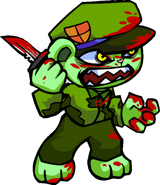 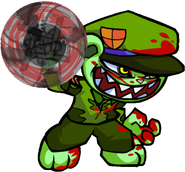 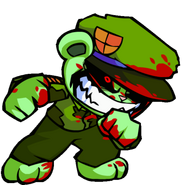 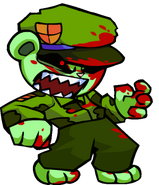 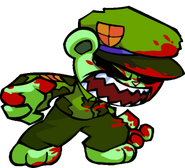 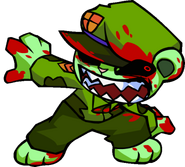 Minus Fliqpy is the opponent of Cleave and Disturbed. He could possibly appear in Playtime, but not as the opponent.

He takes on his appearance in the original Happy Tree Friends, however he has a knife. 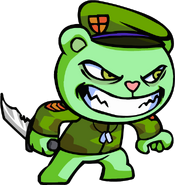 The Background For his week

KAPOW Fliqpy originates from the Happy Tree Friends episode “Ka-pow! Operation Tiger Bomb”. KAPOW Fliqpy’s arms have been worn down to the point where his bones are sticking out where his hands used to be. His bones are sharp and pointy, like stingers. KAPOW Fliqpy has red pupils, and sharp pointy teeth. KAPOW Fliqpy’s mouth is shaped into a toothy, evil grin. His stomach has been ripped open, revealing his intestines. KAPOW Fliqpy is covered in blood. In the up pose, his eyes roll up towards the back of his head, presumably being a symbol of KAPOW Fliqpy and Flippy barely being ‘alive’ in a sense. 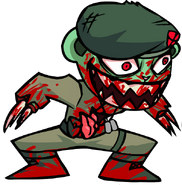 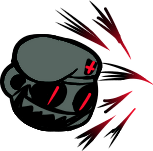 Tiger Soldier is the player character of KAPOW.

The Tiger Soldier is a blue tiger with a submachine gun. This soldier also appears to be sweating. He has goggles and a helmet, and has a military suit. 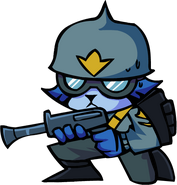 Note: Overkill & Fallout don't have Dialogue, Probably since this is still a demo. And Slaughter is a placeholder and there icon for flaky

Girlfriend: "This trip is a nice change of pace from our usual dates."

Boyfriend: "Yeah, my family and I used to hang out here a ton."

Girlfriend: "It's really nice and it smells good here, though I'm surprised you can drive a car."

30pxNametag: "Where did you last see it, Flippy?"

Fliqpy: "Well, it was somewhere around these trees and bushes, but it's probably best if we split up so we can find it faster."

Fliqpy: "I'll give you a signal if I happen to find it."

30pxNametag: "Alrighty then, I'll go tell the others then."

Girlfriend: "Maybe it's worn from all the adventures you've had. Perhaps it's time to get a new one?"

Boyfriend: "Nah, don't worry, I can fix it. Probably."

Fliqpy in the menu screen.

The sprite sheet for the logo.

Fliqpy & Boyfriend on the menu

"IN ASSOCIATION WITH OURSELVES".

The icon grid for the demo (V1) 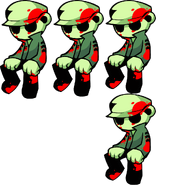 Hiding's Background in V1 of the mod.

A teased cutscene for the mod, featuring Flaky. Note how she now has a sweater and eyelashes. Cuddles and Lumpy can be seen in the background.

A teased image featuring a terrified Flaky hiding behind the speakers and a (pressumably) deceased Cuddles during Slaughter. (This Might Be Scrapped) 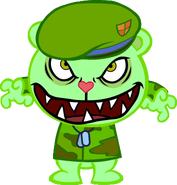 Fliqpy's original and new design in the new HTF style. 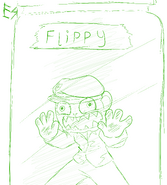 Another image of Fliqpy found in the files, this time depicting him in a jar with the label "Flippy". 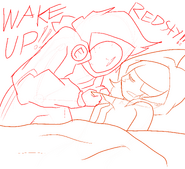 "AAAAAAAAAAAAAAWAKETHEFUCKUPNOW" (Hidden in the game files)

Cuddles' upcoming appearence in the mod