Reason: 1.1.2 (Again) Update was released, so where is the new hey note poses and the other missing stuff?

Reason: Upcoming update is arriving and we're not basically done with all of this, this includes: Hat Kid's and Time Princess's Animated & Static Poses are missing. Gallery is missing some In-Game Images, last but not least. Cameos (For this and the other hat kid page.) and Missing Categories as well.

Issues Present: Idle Sprites for Hat Kid (Normal and Worried) & Princess Idle has white outlines. Like seriously, who does not know on how to export gif images without outlines.

Not to be confused with another Hat Kid Mod.

Vs.Hat Kid is a Mod that adds only 1 week, 4 songs and 4 new psych engine achievements. The development only took 6 months and was released during A Hat in Time 4th Anniversary.

When Bf and Gf found a Time Rift randomly at a unknown told location, they curiously touched it and got transported to Hat Kid's Spaceship. Boyfriend decided to rap against Hat Kid until she transforms into the princess.

Kid with the hat (Mafia Boss)

A Hat in Time

Hat Kid is the main protagonist of A Hat in Time and the Fanmade Anime Series. She's the Antigonist of her own week.

Hat Kid appears with brown hair and a yellow bracelet on the back of her hair. She wears mostly yellow and purple clothes and dress, including her hat. Her shirt has a zipper and she wears brown shoes and a yellow cape. 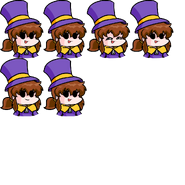 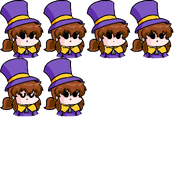 Kokoro Hatsaru (as a OC)
Gears for Breakfast (Originally)

A Hat in Time Anime
Friday Night Funkin' (As a mod)

A Hat in Time Anime

“Ive got to transform for a lil mission, nobody out of this world can know this.”
― The Princess, Princess


The Time Princess is the Princess Version of Hat Kid after remembering stand's eternal farewell. She has the power to control time and use spells!

She has the same appearance of Hat Kid. But instead, she wears a pink dress with a blue triangle upside down on her chest, aqua blue bracelets and some part of her dress. Pink shoes with a blue lil circle at the center. On her back of the dress it has a blue ribbon with long strips, her head has 2 details of a Row of 4 pearls from large to small.

The Clocktowers Stage during Princess

ANIME.mp4 (Note that the audio isn't playing due to its .gif convert)