I have been stuck in Vs. Hatsune Miku for god knows how long, much longer than you can imagine, that one's for sure. - Austin

Reason: Boyfriend and Hatsune Miku's Poses during the blackout in Voca and all of Tricky and Carol's animations need to be added.

Issues Present: Tricky's poses are broken. Also Miku's animated poses are thin, please upload them without them getting distorted

Reason: The crowds can be flashy.

Reason: Hatsune Miku has more fans in other existing platforms, such as Cooperation and Rhythm games. In fact, she was part for early Full Week era and gained more attention. Part of Miku's popularity seems to stem from the widely accepted headcanon that she and Boyfriend are siblings, which the devs of the original Friday Night Funkin' have also stated to be canon.

Reason: Come on, if you see Tricky, you should know why this is here.

Reason: Hatsune Miku is developed by Crypton Future Media, Inc. and affiliated with YAMAHA Corporation and SEGA. Additionally, the original songs from before the update are copyrighted by various producers not affiliated with the mod. This means those songs are in YouTube's Content ID, preventing you from monetizing them if you record this mod.

The Hatsune Miku mod is a mod that includes a Vocaloid/Piapro Studio character known as Hatsune Miku (初音ミク). There are 4 mods, 1st is the oldest version assumed the first, the second is the more recent version, and the last two is for Boyfriend.

The original and newest one replaces Daddy Dearest. The original has the same map while the newest one has a custom stage designed for the mod. The mods are also known to be the first to have the custom campaign menu line art for the menu, which most mods did not have. The newest one may had have the new icon for the bar, but it is unknown if they will add a losing animation.

A full week for Miku has recently been released, bringing forth lots of changes and updates - along with 9 songs in total and an overhaul in her week! Get the mod here: https://bit.ly/3GgN0i8

“Pretty good little bro, I had no idea you were so good at performing!”
― Miku, 2.0 Endurance Cut scene.


Not to be confused with bbpanzu's OLD Hatsune Miku.

Hatsune Miku (初音ミク) is shown to have cyan (or keppel) hair with pink hair bands, black eyes, and a smile. Her outfit has black sleeves with cyan trims, a suit with no sleeves with a cyan tie. Her skirt is black with - of course - a cyan trim with her shoes the same colour while gripping the microphone. She wears a confident expression while facing the Boyfriend. With a fashionable type of pose, her right hand is glued to her right hip while of course her left hand grips the microphone and her legs bent facing together. As a summary, she is depicted with her V2 design, her most well-known look.

Note: All of these cameos are not canon to Hatsune Miku's story:

Miku in her Ievan Polkka pose, as she appears on her new week's title screen. 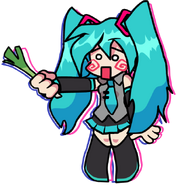 Miku waving to the audience in her brand new intro animation.

Miku presenting Boyfriend in the intro. 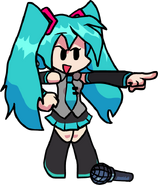 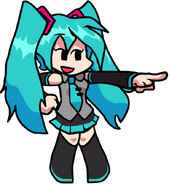 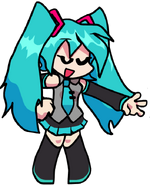 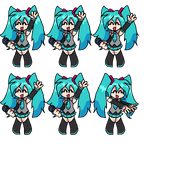 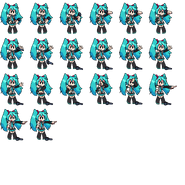 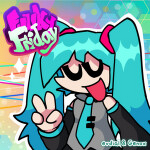 The Clown (Title in MC5: Depredation)

Banished (Destroyed permanently in every dimension)

Tricky the Clown hails from the Madness Combat series by Krinkels. For the main week, Tricky can be seen in the audience enjoying the concert, but for the Ievan Polka cover, he gets up on stage and sings with Miku.


Want to know more about Tricky?

Tricky's appearance is taken directly from Banbuds's Tricky mod (Blue shoes, intact clothing, a blue ruffle collar with lighter blue orbs on it, and red-orange hair curled in a way that bears resemblance to devil horns), with two slight alterations: He now holds a glowstick in his right hand, and the eyeholes on his mask are in an arch, to indicate his excitement towards getting to sing with Miku.

Carol is an OC of bbpanzu. For the main week, she can be seen in the audience enjoying the concert, but for both songs in Freeplay, she takes Girlfriend's place on the speakers.

Carol is an African American girl with black eyes and black hair that she styles into an afro. She wears a long-sleeved light greyish-purple shirt underneath a dark grey t-shirt, blue shorts, black thigh-length socks with white lines on them, and dark and light grey sneakers.She has the same eyes as Girlfriend's eyes. She holds a glowstick in her right hand.

(The cutscene starts with the crowd cheering at Miku)

Hatsune Miku: For this show, we have some guests.

Hatsune Miku: Lets see if u can keep up :D!

(The crowd cheers as the song ends)

Hatsune Miku: I had no idea you were so good at performing!

Hatsune Miku: Woa! I never thou-

(All the lights went out, making the entire stage dark. The crowd gasped in shock)

Hatsune Miku: Calm down everyone, the power must've gone out.

(The crowd cheers once more)

(Miku gives Boyfriend a glowstick, and it lands on his head) 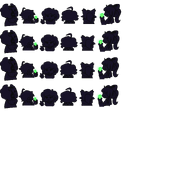 Evdial's stage background for the older version of Miku's mod. 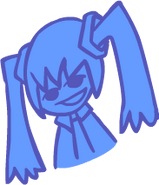 Hatsune Miku in the background of Week 5

The banner for the 2.0 update