Reason: While there's nothing from the mod itself that can trigger anything, it's source material, Amphibia has some instances of near-death experiences, emotional scenes, etc.

Reason: Amphibia and The Owl House are both owned by Disney

Reason: A trailer for update 1.5 came out a while ago for the FunkDirect, and we don't have much about the upcoming update.

Vs. Sasha is a mod made by Jakeneutron.

Not to be confused with the Sasha from Animal Crossing

Bisexual (As confirmed in "The Hardest Thing")

Sasha Waybright is a human girl who serves as a supporting character and an anti-hero in Amphibia, and makes her rockin' introduction in this mod created by Jakeneutron.

Want to know more about Sasha?

Sasha is a rather charismatic girl. She is able to make friends so easily as shown in "Prison Break", where Sasha herself has been shown to have some good relationship with the toads and has even befriended most of them, including her captor, Captain Grime. Sasha has proven herself to be a fierce warrior and is seen to enjoy fighting; she also takes great pride in her strength as shown in the third temple.

While outwardly nice and friendly, Sasha was actually manipulative, cunning, cold and quick tempered. While imprisoned, she was able to convince every one of her guards to quit. After cutting a deal with Grime for her freedom, she helped him trick his soldiers into being more loyal to him. As shown by her willingness to kill Hop Pop, she does not care about the inhabitants of Amphibia, seeing them as gross amphibians. However, this seems to have changed after her fight with Anne, seeing Grime, Percy, and Braddock as her friends.

Sasha is a teenage girl of tall height with a slender build. She has blonde hair tied in a ponytail, almond-shaped eyes, red armor, and a mole on her cheek. 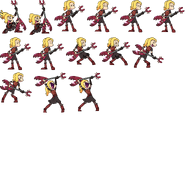 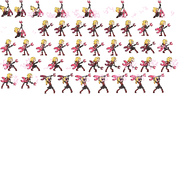 Sasha in the menu screen.

Boyfriend: Babe, pardon my language, but...

Boyfriend: where the heck is your dad?

Boyfriend: He told us to meet here like an hour and a half ago.

Girlfriend: then he does some dramatic entrance to make up for---

[A blue portal appears in a blink of an eye, and Sasha comes walking out of it.]

Boyfriend: your dad turned into a girl.

Boyfriend: you... know this girl?

Girlfriend: I used to babysit for extra money.

Girlfriend: what of it?

Sasha: So you need to take yourself and those chunky little speakers off the stage.

Boyfriend: yo hold up! I've been waiting for hours to song battle, I'm not just gonna-

Girlfriend: C'mon Sash, the little guy can't sleep right if he ain't got at least one song battle in for the day.

Sasha: I gotta practice a little bit before the others come anyways.

Sasha: I'll song battle you for a bit and then you all go. Sound killer?

Sasha: I don't hold back kid, so try not to croak mid song, okay?

Grime: Not so fast!

[Suddenly, a hammer comes shooting out of the sky in a twinkle, and crashes onto Girlfriend's speakers, revealing Grime.]

Girlfriend: DUDE!! these were rentals!! Noooo....

Sasha: Grimesyyy! Toad Army! Y'all made it!

Grime: Sashaaa!... who are the two mini monsters?

Boyfriend: Are those talking frogs!!??

Girlfriend: When you said you had a crew coming I thought it'd be like...

Girlfriend: maybe 2 other girls or something.

Sasha: But they're a little... wrapped up in something right nowww

Sasha: so I'm rockin' with these guys!

Girlfriend: A little ominous on that "wrapped up in something" line

Girlfriend: but i get it.

Sasha: This battle isn't over.

Sasha: You could handle me at my best...

Sasha: but what if we take it up a notch?

[Sasha strums her guitar, the gem in it sparking and flashing, now revealing Sasha charged up.]

Girlfriend: OKAY—- when did THAT start happening, girl?

Sasha: I am awesome~! 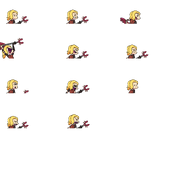 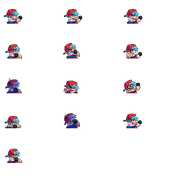 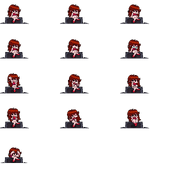 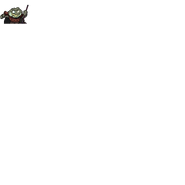