Vs. Singe and Sear

And he said Vs. Singe and Sear was "THIS BIG", and I said "that's disgusting". - Fandub Eggman

Reason: We need the characters' animated idles and poses.

Vs. Singe and Sear

Friday Night Funkin': SINGE AND SEAR is a mod made by Summus, the same creator who made Friday Night Funkin’: Tales From the Raveyard (Vs. Mystic Myra). It features 4 brand new songs, 3 in the first week called "Burning Love" and the 4th song in the second week called "Cooldown". A 3rd week is also made available as it remixes all 4 songs together.

One night, Boyfriend receives a mysterious text from an unknown number, claiming to be a big fan of his and wishes to sing with him at a nearby bar alone. Not willing to turn down an opportunity to sing some songs, Boyfriend heads to the bar alone to confront the mysterious person, despite the concern of this being a trap for something bad. At the bar, the mysterious person seems to be talking to someone, but it quickly gets pushed back when Boyfriend arrives to confront the fan. It turns out that this person's name is Singe, a woman who was a fan of his since a rap battle he had at the subway station, and she seems to be very nervous. In the first 2 songs, Singe seems to act very flustered knowing that she was singing with her idol. Before the 3rd song, she finally confesses her feelings for Boyfriend and asks him out on a date. Boyfriend says that he's already dating Girlfriend and even even shows Singe a picture of him and GF on his phone. Singe quickly apologizes, realizing how lucky BF is to have GF, but begins to talk to an unknown entity. Singe warns BF to run while he still can, but that's when said entity, Sear, escapes from Singe's body. Sear curses out Boyfriend for hurting Singe's feelings and states that had it not been for him dating a "she-devil", he would have broken the curse of Sear being attached to Singe. She then battles BF in the 3rd song, but is ultimately defeated. After that, she wants to fight BF as long as she wants, but not before hearing police sirens and retreating elsewhere with Singe, postponing the "revenge".

Some time later, Singe invites Boyfriend to another nearby bar. She seems to be concerned that he wouldn't show up after the events of Week 1, but Boyfriend does indeed arrive, startling her in the process. Singe apologizes what happened and says that she's put Sear in "time-out" in a jar. After a bit of clearing up about Sear, Singe later says that she wants to start over with him and that they could still be friends who like having fun singing together from time to time. As Singe fears that he'll say no or that he'll never want to see her again, Boyfriend shockingly accepts the offer of them being just friends. The two bury the hatchet and head to a karaoke machine to perform a song.

The mod has received positive reviews by many as they're calling it another underrated classic by Summus. Many applauded the cutscenes, the songs, the story and especially the characters. Many have also gone on to applaud Singe's character to the point where they just want to give her a hug.

Singe is a shy girl who has a crush on Boyfriend. One day she invites Boyfriend to sing with her at a bar.

Singe has messy, black shoulder length hair with red and orange tints on the tip of her hair. While bangs cover her right eye completely, her left eye can be visible sometimes in the shadow.
Singe wears black sleeveless shirt, golden belt, long black pants and black shoes with golden soles and parts. She also wears black gloves and golden bracelets on her gloves. Singe has bandages on both of her shoulders and her hands (under the gloves). On her back she carries a red canister, which contains Sear.

Static idle in Heartburn and Molotov 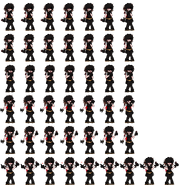 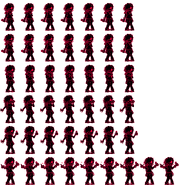 Sear is a vengeful, guardian sprit of Singe. She usually stays in the red canister Singe carries on her back.

The color of her body is black with orange and yellow tints on the tips of her body. She has long, sharp fingers, medium length hair and a wispy tail in place of feet. Her eyes, the inside of her mouth and teeth are yellow. Most of the time her pupils cannot be seen, but on some occassions her yellow pupils can be visible.
When Sear becomes angry, the color of her body turns into orange and the tints also become brighter. 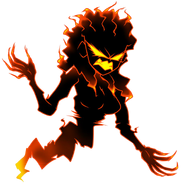 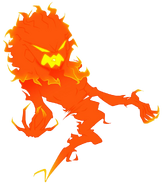 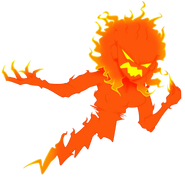 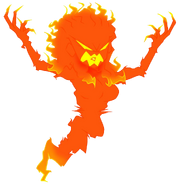 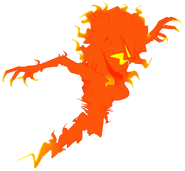 ???: I know you probably don't recognize this number but...

Singe: Hhhhh... This isn't gonna work. I can't even get a word out, and he's not even here.

Singe: I don't think he is gonna show. We should just go home...

Singe: M-My name's Singe. I don't you've ever met me before, but I saw one of your performances on the subway...

Singe: I was wondering... W-Would you like to sing a song with me?

Singe: W-Wow, that was really nice! You've got a really sweet singing voice...

Singe: I know you're probably busy, o-or you've got somewhere to go but-

Singe: I, um, wanted to ask you something...

Singe: Maybe it'd be easier if I sang instead, just to get it off my chest...

Singe: I'm sorry, I'm a little choked up. I've never sang for real with anyone else before...

Singe: I want to sing more with you. It makes me smile for some reason I can't explain, and don't want that to stop.

Singe: YOU ALREADY HAVE A GIRLFRIEND?!?!?

Singe: That girl with the speakers... it all makes sense now!

Singe: O-Of course. I am sorry about all this- she's a lucky girl to have you, a-and-

(Sear comes of her canister)

Sear: BUT THEN YOU SCREWED IT ALL UP JUST BECAUSE YOU'RE DATING SOME DAMN SHE-DEVIL!!

(Sear gets angrier causing her to light up)

Sear: NOT TO MENTION YOU HURT!! HER!! FEELINGS!!

Sear: SCREW YOU, KID! NOBODY HURTS MY HOST'S FEELINGS!! NOBODY!!!

Sear: I'LL MAKE SURE YOU'RE BURNING LONG BEFORE YOU REACH HELL!!!

Boyfriend: be skoo be bai

Sear: WHY WON'T YOU JUST GO DOWN ALREADY?! WHAT THE HELL ARE YOU MADE OF?!

Sear: FINE BY ME! I'LL FIGHT FOR HOWEVER LONG IT TAKES! ONE WAY OR ANOTHER, YOU'RE GONNA PAY-

Sear: I CAN'T GO BACK TO PRISON! SCREW THIS, I'M OUT! REVENGE POSTPONED!

Sear: C'mon, sweetie. Let's get you home. He's not worth your time.

(Singe and Sear ran away)

Singe: H-He's not here... maybe I should head home and-

Singe: Th-Thank you for meeting me. I was sure you weren't gonna show after what happened last time.

Singe: S-So sorry about that, by the way. Don't worry, I put Sear into a little time-out.

Singe: She's not so bad once you get to know her- just a tiny little anger issue, that's all!

Sear: YOU ONLY LIVE BECAUSE I ALLOW IT.

Singe: Since you're here, I do have something to ask you for...

Singe: I think your really cool, and I love the music we made together, and...

Singe: Truth be told, it'd make me happy if we could still be friends who just have some fun singing together from time to time.

Singe: A-And I totally understand if you don't say yes, or if you never want to see me again, or-!!

Singe: Wait, you're not mad at me? Even after all that happened?

Singe: I can't understand a word you're saying, but... thank you, BF. Friends?

Singe: A-Alright! Come on, this place has a karaoke machine- let's do one more song!