However during the last song I researched Vs. Sly, and to be honest I found some...unsavory things. - DRX-49

Upcoming: Vs. Sly 2 is soon to release as a full seperate mod with a new week and tons of bonus content, Including a song shown exclusively at FunkDirect (Although they forgot to include it).[1]

Reason: We need sprites for Minus Sly and the other versions of Sly.

Vs. Sly is a mod created by SamTheSly, it originated from an Inside Joke about turning his OC into a Full week mod. There are several versions of the mod that can be downloaded Including the Legacy version, V1.5, Remastered, and the Upcoming Vs. Sly 2 Mod.

Not to be confused with Spy, Sky, Other Spy or Skye

“Nobody has dissed my haircut and lived to tell the tale.”
― Sly, Quake

Sly is a fan of Boyfriend. After meeting him in the mall, they have a rap battle and attract a crowd. But after losing to Boyfriend too many times, things start to go south...

Sly is a light-skinned young man with big, spiky purple hair. He wears a red hoodie that is black on the inside of the hood, with two black and white laces. He also wears gray pants and green shoes with white soles.

In the third and fourth song, his hair becomes static and changes color depending on which note he hits.

There are currently two planned crossovers including Sly.

Note: None of these cameos are canon to Sly's story. 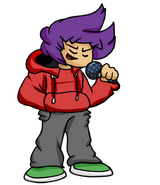 Sly during the quake cutscene

Sly's icons during the classic songs

Art used in cutscene before Nightmare 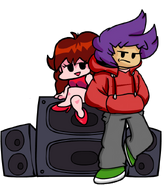 Sly and Gf in Slyception

Art made in celebration for Sly reaching 10k downloads 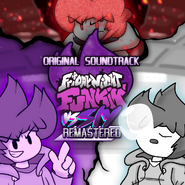 Art made as the album cover for Sly remastered

Ditto but only the Sly render.(found in gallery)

Ditto but only Sly and BSly.

Artwork of Hoodie guy from Gallery(clickable) 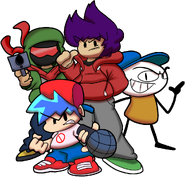 Art made for MattxSly crossover teaser

Art made of Sly for Sly and Roger Chaos cover 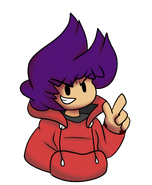 First art of Sly holding his finger up

Second art of Sly holding his finger up

Poster made for upcoming Sly2 update

Ditto but made for iPhone wallpaper 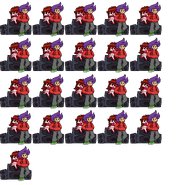 Sly sprites during the song Slyception

BSly is a light-skinned young man with big, spiky green hair. He wears a pair of black sunglasses, a black hoodie that is black on the inside of the hood, with two black and white laces. He also wears white pants and purple shoes with white soles.

“But I have one last trick up my sleeve. See if you can keep up.”
― Roger, During Roger

After Sly's battle with BF, Roger wanted a turn in the spotlight. Although he doesn't appear to be the best at it.

Roger is a white-skinned young man with an orange torso and blue cap. His limbs are black and slim, like sticks. 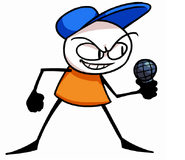 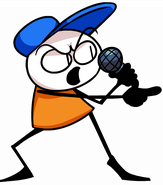 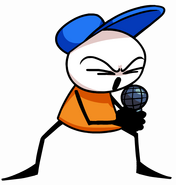 Roger's down pose in Roger 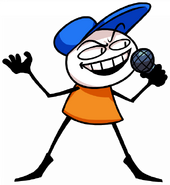 Roger's up pose in Roger 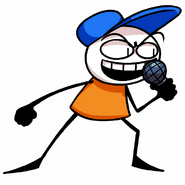 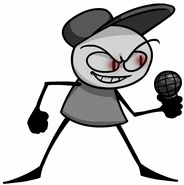 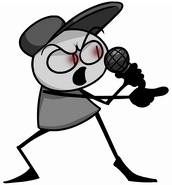 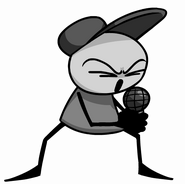 Roger's down pose in his Nightmare cover 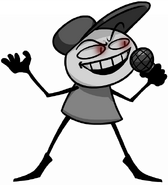 Roger's up pose in his Nightmare cover 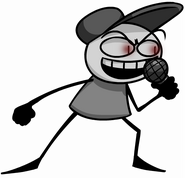 Roger's icons in his Nightmare cover

Artwork of Roger from Gallery(clickable)

Art made of Roger for Sly and Roger Chaos cover

Roger's spritesheet during his song Roger

Roger's spritesheet during his Nightmare cover

Dumb Sly is a version of Sly in Vs. Sly 2 that first appeared in the Demo, He has one song in the mod called Dumb.

Dumb Sly is Sly, but shrunk down with more simplified clothing, being just solid gray pants and a solid gray shirt. His hands are red balls and his eyes are very stretched. 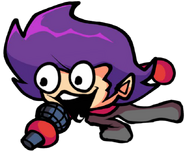 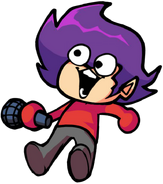 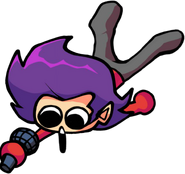 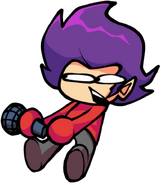 Minus Sly is a minus version of Sly in Vs. Sly 2 that first appeared in the Demo. He has one song in the mod, which is a remix of Rematch.

Minus Sly is a minus version of Sly where he has a gooey purple head and hair, which often drips. He also wears the classic gray pants and green shoes that normal Sly wears. Instead of a red hoodie, he wears a light green shirt with a purple jacket overtop.

Torment Sly is a version of Sly in Vs. Sly 2 that first appeared in the Demo. His song is called Torment.

Torment Sly appears almost identical to Sly in the song Nightmare, but he has much larger hair, a more sinister smile, and small red eyes.

Hoodie Guy is an upcoming character coming in the Vs. Sly 2 Mod.

Sly
What it do, big guy?

Sly
You taking your girlfriend out shopping?

Sly
Y'know you're no stranger to me.

Sly
I've seen you around here plenty of times.

Sly
And you've got a pretty sick voice, homie.

Sly
Yo, you should drop a beat right now.

Sly
Dope. I've been dying to jam with you for quite some time now.

Sly
Let's get it.

Sly
Damn, kinda drew in quite the crowd back there.

Sly
*i can't embarras myself in front of all these people!*

Sly
*my homies are here, they can't see me eff up like this*

Sly
*especially that shorty on the speaker*

Sly
Lemme play a little something I've cooked up.

Sly
Saved it for an encounter just like this.

Sly
You piss me off.

Sly
No way you're keeping up with me now.

Sly
Too bad nobody's around to watch you choke.

Sly
But it's chill. This is personal now.

Sly
Nobody has dissed my hair cut and lived to tell the tale.

Sly
And your puny ass would never even come close.

Sly
It's funny to me you think I'd go down so easy.

Sly
Your girl needs her a guy, not a baby.

Sly
And blue hair? I know mine is purple but blue is never the move, man.

Sly
Maybe red is more your style once I'm finished with you.

Sly
Oh, I'm the douchebag? You humiliated me in front of everyone I know.

Sly
I'll humiliate you in front of who matters to you the most right now.

Sly
Oh yeah I think so, you little shit!

Narrator
After a long day of rapping, Sly only would pout.

Narrator
He could not live longer after the defeat from his bout.

Narrator
I wonder what poor Sly is dreaming about.

Narrator
Surely his redemption, without a doubt.

Sly
Yo! Big guy! Over here!

Sly
What it do, homie? You remember me, right?

Sly
Where have you been in the last age or two?

Sly
Yeah I get it. Girlfriend and stuff...

Sly
What you lookin' for on this fine evening?

Sly
You think you could grab me a Pepsi?

Sly
Y'know, after the inevitable rap battle we're about to get into of course.

Sly
Sweeeet. I am dying of thirst, thank you homie.

Sly
Ya might need one yourself, after these bars I'm about to drop.

Sly
Let's just get right into it. Put my tape in.

Sly
Prepare yourself, little dude. I ain't slowing down.

Sly
Y'know I thought for sure i had you this time.

Sly
I've been workin' on that one for weeks.

Sly
Good to see you haven't changed a bit.

Sly
It's alright though. I've got a whole ass library of beats.

Sly
Here, pick one of these. Tell me which one you want.

Sly
Where the fuck am I?

Sly
"Divorce type beat"? What the hell does that even mean?!

Sly
You're not real.

Sly
None of this is real.

Sly
I'm in some kind of dream or some shit.

Boyfriend
Nah you on drugs hahaha.

Sly
I just realised I'm in a dream!

Sly
I mean this is crazy! When was the last time you knew you were dreaming?

Sly
Can I really do anything I want now?

Sly
You're one of the thoughest rappers in the game right now.

Sly
Never in my life have I ever seen so much talent as much as you have.

Sly
I know I might just barely beat you in a battle one day...

Sly
...but i'd just like to see you struggle against me just once.

Narrator
Even in his dreams, he could not stand throughout.

Narrator
He was still no match, he had to tap out.

Narrator
Witnessed by many, no fame and no clout.

Narrator
With all this frustration, he let out a shout.

Narrator
Poor Sly never forgot the day when he rapped.

Narrator
He had that same dream every moment he napped.

Narrator
He could not take it. He felt so trapped.

Narrator
This was the night Sly finally had snapped

The characters in the background of Wow, Hoodie, Wow Classic, Hoodie Classic and Guns Cover

The characters in the background of Quake, Quake Classic and Busted

The background of Quake, Quake Classic and Busted

The foreground of The background of Quake, Quake Classic and Busted

Background walls of Rematch, Slyception, Dumb and Rematch Minus Remix

Background escalators of Rematch, Slyception, Dumb and Rematch Minus Remix

The foreground of Rematch, Slyception, Dumb and Rematch Minus Remix

The backgrounds for reality

The filling for the crack in Nightmare and Nightmare Roger cover

The foreground of Nightmare and Nightmare Roger cover

The background walls in Sly and Rampage

The background escalators in Sly and Rampage

The foreground of Sly and Rampage

The background of resonance 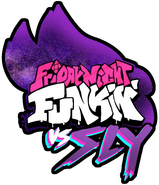 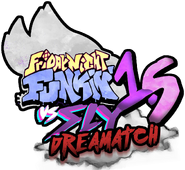 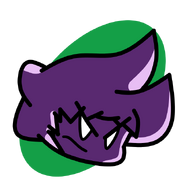 Art used as the icon for sly mod

The background checkerboard of the main menu (Remastered)