Reason: Some featured media is based on SpongeBob SquarePants-based creepypastas or other disturbing media, while others are based on official SpongeBob episodes and other media that is considered disturbing by some. Additionally contains disturbing and violent imagery.

Reason: Depictions of suicide, gore and other disturbing imagery, references to NSFW material

Reason: Spongebob Squarepants and The Loud House are properties owned by Viacom and Paramount+.

Note: This is in very early development.
Unfinished Page

Upcoming: The memes, bonus characters and the Pibby Week will be added after the demo is released.

Vs. SpongeBob Media is a upcoming mod made by Micheal A. (aka me, 1234xs), in this mod, you face SpongeBob related material, which are creepypastas, memes, official media, etc.

Special thanks to Dave Microwave Games for making Around The Clock At Bikini Bottom
Kibo~panpan for making Bold and Brash and Hell Or High Waters
Stephen Hillenburg for making our favorite little cartoon sponge.

Suicide Squidward, often confused with Red Mist Squidward, is the first character that appears in the Vs. SpongeBob Media mod.

Suicide Squidward is identical to the original Squidward, though with a darker color palette and black eyes with bloodshot pupils and blood running down his face.

Suicide Squidward in the mod suffers from depression and displays suicidal tendencies, shown from the end of Week 1 where he shoots himself with a shotgun.

Yummer is the second character that appears in the Vs. SpongeBob Media mod.

Yummer is composed of a brown smooth light-skinned head model, flat images of a pair of bloodshot, bulging eyes, a mouth forming a wide smile, and ears. It is also photorealistic.

Yummer itself is quite mysterious, often hiding from others behind objects.

Sponge.avi, or more commonly known as Bootleg Spongebob, is the third character that appears in the Vs. Spongebob Media mod.

As the name implies, Sponge.avi is almost identical to SpongeBob, though with a slightly darker palette and bloodshot eyes taken from the Dumped Bootleg Creepypasta.

Sponge.avi himself is relatively nice. Although he's...not really in the right set of mind right now. (No Spoilers)

• SpongeBob SquarePants
• Around The Clock at Bikini Bottom
• Vs. SpongeBob Media

The Overlord, also known as the Jellian Leader or the Evil Alien Jellyfish Overlord is a Alien like jellyfish that fist appeared in the season 8 episode, Planet of the Jellyfish. The Overlord is the fourth character that appears in the Vs. SpongeBob Media mod and represents Around the Clock At Bikini Bottom rather than creepypastas.

The Jellian Leader looks like a giant, light green jellyfish with shiny black eyes on snail-like stalks. Similar eyes are present on its Jellian minions and clones. Its internal organs - a brain and what appears to be two orange crusty hearts - which jellyfish lack, can be seen through its transparent body. It has a huge mouth located on the lower part of its body and 15 squirmy legs.

It appears that the Jellians' species has a matriarchal system, as the leader serves as Alpha/Queen for the Jellians within the hive. The Jellians that it creates serve as drones/scouts, while Jellian Clones serve

The Overlord is a malicious entity with the intent to invade and conquer whatever land it sees fit, often using Jellian minions or false copies of others to do so.

Red Mist Squidward, often confused for Suicide Squidward, is the fifth character in the Vs. SpongeBob Media mod.

Red Mist Squidward, unlike Suicide Squidward, retains the normal color palette of his normal counterpart, though has large black eyes with bloodshot pupils and black sludge running down it.

Red Mist Squidward is personality has not been revealed yet

SpingeBill is one of the characters you face in this mod.

SpingeBill looks almost exactly like SpongeBob, though with black eyes, having a more saturated color palette, and the stripes on his socks having gray and dark gray instead of red and blue.

Note: All of the meme and other characters are the beta versions

Not: These aren't canon to the characters or their original story.

The beta version of the mod's Icon Grid.

The Overlord's original appearance in the episode Planet of the Jellyfish 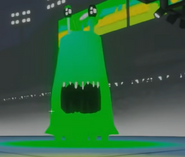 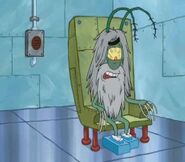 The base for Plankton's appearance. 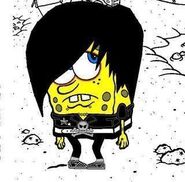 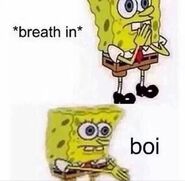 The meme that Tom is based on.

What the mod's Mrs Puff is based off of.

A beta design for Sponge.avi.

A beta design of SpingeBill.

The background for Week 1

The background for Week 2

The background for Week 3

The background for Week 4

The background for Week 5

The background for Week 6

A Teaser Of The Intro Text

A Warning Made By Me On GameJolt

The old version of the logo