Yoshi is an iconic character from the Super Mario franchise, who debuted in Super Mario World and also stars in his own spin-off franchise, the Yoshi's Island games. This mod sees Boyfriend face off against him, requesting the dinosaur's help to rescue Girlfriend, who was kidnapped by Kamek. Due to Girlfriend being kidnapped, Baby Mario takes her place on the speakers.

“Uhh.. hey there, little guy. You're not another one of those babies that fell down, are you?”
― Yoshi, Flower Garden


Yoshi is the main "antagonist" of Week Egg, but Boyfriend is quick to make Yoshi an ally as they settle on tracking down Kamek to rescue Girlfriend.

Yoshi is a dinosaur-like creature with black eyes, green skin colour with some patches of white, and red bumps going down from his head to his back. Along with that, Yoshi has a red saddle with a white outline on his back with some orange and white shoes. 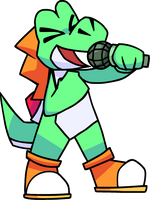 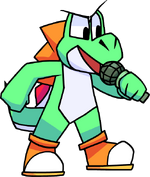 Yoshi but ticked off.

Yoshi with a puzzled expression. 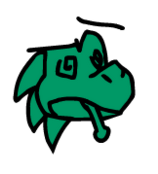 Since Girlfriend was the one to be kidnapped in this mod, Baby Mario sits on the speakers, bopping his head to the beat and crying whenever Boyfriend misses a note.

Baby Mario wears his trusty cap with the letter "M" on it. He doesn't wear anything else besides a diaper. 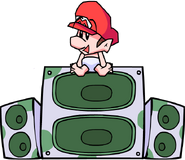 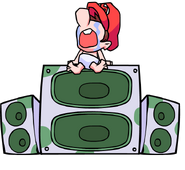 Baby Mario As Seen In The Mario Series

Image of the crew for this mod.