Reason: We need the audio files for Diagraphephobia and Post-Mortal's fail lines, and the miss assets for Boyfriend. Also, the note assets.

YOU GONNA COMPLAIN ABOUT IT, Vs. eteled? - Tricky the Clown

Reason: This mod contains important information for "Wii Deleted You” and general info about the secret meme song "Bananeled"

Reason: eteled comes from the creepypasta known as "Wii Deleted You", a creepypasta with themes of violence, torture, child abuse, etc. Also, eteled's icons and appearance during Diagraphephobia, Plaything, and System Failure may disturb some people. Plus, Austin sometimes glitches during Post-Mortal (and the Mii Channel Menu during Diagraphephobia) which might also be disturbing to some people. Also, if you die as Austin in Plaything, he gets killed with an axe. Cutscene 7, 8, and 15 may be unsettling. This warning is continued in the music section.

Yeah, because I'm a loser, and I CAN'T MAKE ANYTHING SUCCESS IN MY LIFE! - Taeyai

Topic: Read the first sentence of the notice above.

Reason: Bananeled is a funny joke and it's song can get access through the debug menu.

Note: It was one of the fastest mods to get onto Fan Favorites, getting on there at least a week after release.

Alright, this is a long one. Can you keep up the rhythm? - Matt

eteled was moved here on request of TheMaskedChris. If you were looking for Mii Funkin' go here.

Mii Funkin: Vs. eteled is a mod created by TheMaskedChris and his team. It is a standalone part of the Mii Funkin' mod.

This mod sees Boyfriend and Girlfriend getting put into an unsuspecting Wii by Daddy Dearest, which he didn't know belonged to a teenager named Kyle Sanders. Challenging a strange Mii they meet to a rap battle, things quickly go wrong…

This Mod adds 5 new songs against both eteled and Austin/The Corrupted Mii, 3 in the main story and 2 freeplay songs.


Eteled is the main antagonist and protagonist of the Creepypasta series Wii Deleted You and the deuteragonist of its sequel Wii Deleted You: Sam's Story, both originally created by IceyPie and adapted into an animatic by TheMaskedChris. He also appears as the main antagonist in Wii Deleted You: Corrupted Data Revived under his real name, Henry.
He was originally a regular human that worked for Nintendo, but an accident with a Wii caused his human body to get killed, while his soul was transferred into the Wii and into the Mii he had created, thus making him into Eteled.

Eteled is a bald Mii character with large eyes and a small nose. He wears a black shirt and pants. His hands appear as spheres, although unlike Matt he has arms. In Dream Of Peace, he has a worried look.

For Diagraphephobia, his pupils are larger, he has a wide grin, and he now holds a fire axe in his left hand. At one point, his eyes turn nothing but black. 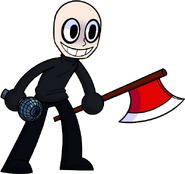 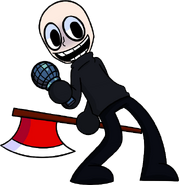 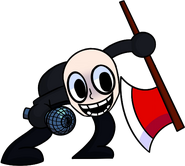 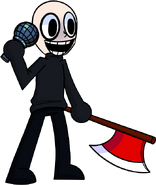 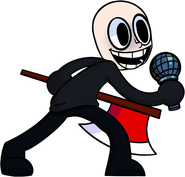 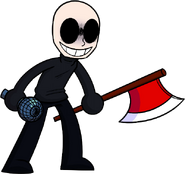 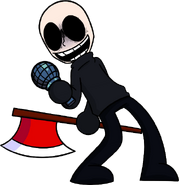 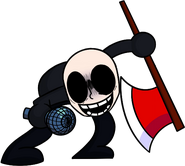 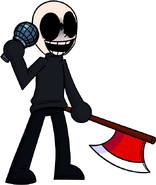 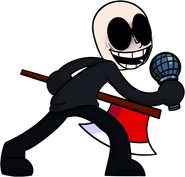 “Electricity can cure a lot of things! Especially when the shocks go straight to the head…”
― Austin, Sam's Story

Austin is the main antagonist of the sequel to Wii Deleted You (known as Sam's Story) and the protagonist of Corrupted Data Revived in both his human form and his Mii/3D model body.
When he was a human, he held the belief that he was entitled to the world's beauty and no one else was allowed to destroy it, leading people (including doctors and his own parents) to believe he was a sociopath, and his parents repeatedly taking him to therapists to change how he saw the world. This led him to have an interest in video game creation, since in that job he could finally build his own little world. He became a Nintendo employee along with Henry, but was killed by him after he started to get more successful than Henry. Austin's spirit was later resurrected inside a computer, which he used to create his Mii face and 3D model body. He originally used his afterlife to help Nintendo employees, but Henry's Wii accident also affected him, transferring him into the Wii with Eteled and corrupting/glitching him, making him the way he is now.

Austin is a bald Mii character like Eteled, who wears a chest plate with pauldrons, and a black scar through the chestplate. His eyes are pitch black, sometimes with white pupils or irises depending on emotion, and he has sharp teeth. He has gray hands, with black arms and legs, as well as some red armor. 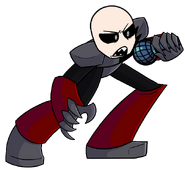 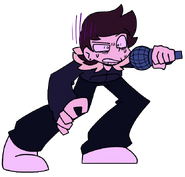 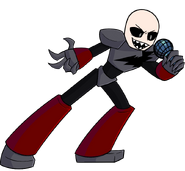 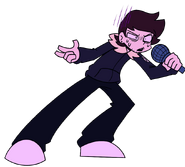 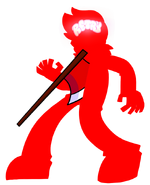 Note: None of these cameos are canon to eteled or Austin's story.

Reason: Eteled’s scream-like noise in Diagraphephobia, Plaything, and System Failure is pretty unpleasant/loud, and Austin's voice may sound ear grating in some sound qualities. Also, the menu theme has pretty loud bass. Also, Eteled's line "I'M BANANALEEED" is, well, shouted at the top of his lungs.

Reason: The menu theme has extreme glitching at some parts, and has a VERY menacing tone. Cutscene 2 may be unsettling. Also, parts of Diagraphephobia and System Failure give off very dark and strange vibes.

(We're in a teenager's room... gaming memorabilia adorning the walls and floor. A teenager is using her laptop on her bed... We zoom in on an unsuspecting Nintendo Wii console. A black shirted Mii is turned around, brooding.)

(The black shirted Mii whips back around, confused and startled.)

eteled: Were... Were you guys following me just now?

eteled: Uhh, well... Okay, where did you guys come from? How did you even get here?

eteled: You're challenging me to a rap battle?

eteled: Uhh.. I wasn't expecting that, especially from you guys...

eteled: Alright, Let's do this!

eteled: I hope I won't regret this...

eteled: Heh! I guess that wasn't too bad, what do you guys think?

Girlfriend: Yeah, you sounded great too!

eteled: Thanks... I've never done that much singing before.

Girlfriend: I figured, since I've never really seen someone like you before. If you don't mind me asking... who are you, exactly?

(eteled turns to look at Boyfriend, as Girlfriend is looking blankly off in the distance.)

eteled: The name's eteled, I'm just your average Mii. I have been here for a long time...

eteled: I've kind of lost track of time to be honest...

eteled: But I mean, it's usually quite peaceful here. But, We aren't alone.

Girlfriend: Is there someone else here with us?

Girlfriend: Who are you talking about?

(An unknown Mii reaches his hand out, a white eye piercing through the darkness.)

Austin: Let's experiment with this new thing I found out...

(The cursor picks up eteled, bringing him to the delete icon.)

eteled: LET ME GO, YOU HAVE NO IDEA WHAT YOU ARE DOING, DAMN IT!!!

Girlfriend: Uhh, we should go...

(A dark faced Mii staggers out of a now glitchy delete icon.. Could it be?)

eteled: ...Did you really think that doing that was a good idea!?

(He moves his head a bit... he seems to be grabbing something from his back...)

eteled: If there is one thing I need to get through your head... Don't. Delete. Miis.

(eteled then pulls out his axe.)

eteled: But, heh... let's see if you don't lose your head by the end of this.

eteled: Well... you managed to last through all of that without losing a single limb. I'm surprised. So, why not answer this?

eteled: ...What the hell was that all about? What were you thinking?!

eteled: Not hurt? Do I seriously look “not hurt” to you!?

eteled: Listen to me. There are a lot of things you don't know about this place.

Girlfriend: What do you mean by that?

eteled: Being deleted is painful. Like, physically painful. He knows exactly what I'm talking about...

Girlfriend: I- I still don't understand... Who is this guy that you're talking about?

eteled: Oh, I'll show you who he is alright. Starting with you.

(eteled sprints up to Boyfriend, grabbing him.)

Girlfriend: Hey—! Stop that! You don't have to do this—!

eteled: This is what you get..

(Girlfriend panics and sprints into the delete icon herself. eteled sits down next to her now glitchy speakers.)

(Transitions to the Hallway.)

Austin: Yep, it sure is. Welcome to “the hallway”, the place where Miis go when they get deleted. Allow me to introduce myself.

Austin: My name is Austin, and I've been watching over you and my little friend from afar, and I must say, I'm impressed…

Austin: I got a kick out of watching! But I figured, why not join in on the fun as well?

Austin: I have been stuck in this damn Wii for god knows how long, much longer than you can imagine, that one's for sure.

Austin: So, surely it wouldn't hurt having another competitor, now would it? I bet that I can be an even bigger challenge than eteled ever could.

Austin: What do you say?

Girlfriend: I've.. got a bad feeling about this...

Austin: Don't worry, I'm sure he will be just fine, he can handle it. Won't you?

Austin: Good, now let me see what you've got. And just so you know, I won't be going easy on you. Get ready for me to blow your mind!

Austin: But I’m not going down that easily. What do you say we have another round?

Austin: Great... This is gonna be fun—

(eteled swings the axe, but both Austin and Boyfriend dodge it.)

eteled: I should have known you would’ve been here, Austin!

(Eteled and Austin prepare for a fight as Boyfriend and Girlfriend get the funk out of there.)

(Cut to static. It pans up, as we see two teenagers curiously looking at the screen, named Sam and Kyle.)

Sam: What the hell was that?

Kyle: Do you think I know?!

These are the quotes randomly used by Eteled or Austin respectively if Boyfriend gets blue balled. They are listed in no particular order.

Artwork of the characters on the album cover 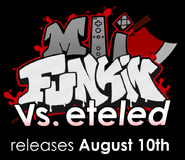 The background during Dream Of Peace

The background during Post Mortal, Plaything, and alternate section of Diagraphephobia

The background during System Failure & Bananeled

The Mii buttons during Dream of Peace

The Mii buttons in Diagraphephobia

The thank you note after you beat the main week. 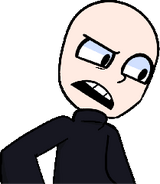 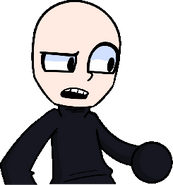 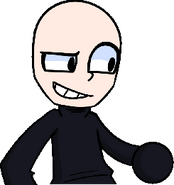 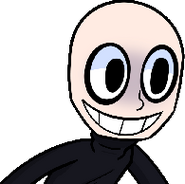 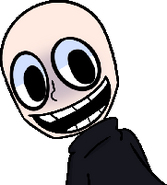 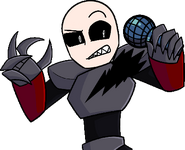 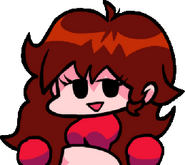 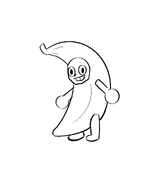