Man Who Came From The Other World (River Person, supposedly about Gaster/So Sorry)

Not to be confused with X!Gaster.

W.D. Gaster, or just Gaster is a hidden character in UNDERTALE. He was the original Royal Scientist before Alphys. His death remains unknowed as their are three different reason given by his "followers" : Shattered across time and space, Experiement Failing etc.

In UNDERTALE, something known as 'FUN' Value exist within it. Different fun values give different type of fun events (hence the name "FUN" Value). Having the 'FUN' value as 66, the player can encounter Gaster. In the mod, he challenges BF to a rap battle. If he wins he gets his body back,escaping from the void and living among the monsters. If he loses he fades away.

Although it's unknown what his appearance is before his death. It's theorized that he wears a black coat with a white inner shirt. His skin color is white and one of his eyes show a U pattern. The lines on his head is presumably cracks which he had possessed after his experiment failed. 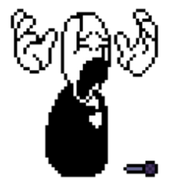