Funkipedia Mods Wiki
Register
Don't have an account?
Sign In
Advertisement
in: Characters, Boyfriend, Based on Media, Animated Characters

JosperBuchinyan (when fused with Jibanyan)

Yo-Kai Watch
“What's up, my corporeal friend? My name is Whisper, at your service.”
― Whisper, after being freed from the capsule in the Anime episode, Yo-kai are Real!

Whisper, previously named Nonuttin way back when, is Nathan Adams, or the player's butler. Once Nate or the player freed him from his gachapon prison, he would soon claim himself to be their Yo-Kai Butler, and give you the titular Yo-Kai Watch. Despite being in the Yo-kai Watch franchise since the beginning, the player is not able to use him as a playable character until Yo-kai Watch Blasters.

Whisper is one of the mascots of the Yo-kai Watch franchise. In the games, he often refers to himself as the player's Yo-kai butler, offering them advice and assistance wherever and whenever possible or necessary.

Whisper is a white ghost-like wisp who has eyes with a curved black mark connecting his eyes, resembling a mustache. He has blue lips that almost always smile at the cheeks, and teeth as well as a set of arms. He has a wisp on top of his head that resembles an ice cream swirl, as well as at the bottom that always move whilst he floats.

Usually, Whisper uses a tablet-like object called a Yo-kai Pad, whenever he searches up information for Yo-kai that Nate discovers. Aside from that, he uses it to look at news that goes on in the Yo-kai World. 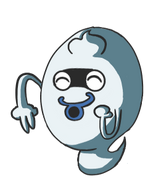