“I have an idea. Mind if we have our own little match? I love music.”
― Xe, Shockwave

Xe is a humanoid gray cat-dog created by InukoExo.

"You come across Xe in Tik-Town. She's standing by the sidelines, bored and bummed she's being left out of the ensuing battle happening at the distance with her twin, Ex, and the seasoned hero, Apex.

You decide to give her some company and pass the time by rapping together! Have fun with this electrifying gal-er... guy? (well... Xe used to be one until the 'incident'... Eh, Xe's figuring it out)."

Based on the dialogue in the mod, a bit of her story seems to be that she was a guy until she did 'something stupid'. And she seems to share a lot of what's on her mind, even to her displeasure.

Her powers are unclear, but look like it could be electricity.

Xe is a "Cat-dog" (Presumably a hybrid), she has bluish grey fur and white eyebrows and spots on her cheeks and she has red glowing pupils. She wears a orange t-shirt with red shortalls. While idle, She taps her microphone on her hips and her tail moves like an electrical current. Her eye also has small, flowing spark. While singing she can be seen producing electricity from her legs in each pose. 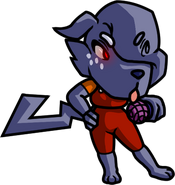 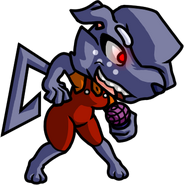 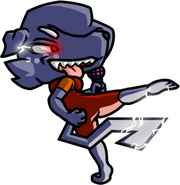 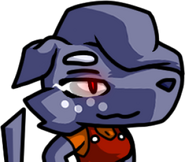 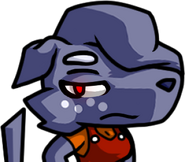 Xe's stage background. Ex and Apex can be seen fighting in the distance.

End scene of XOXO (creator's sona) after rapping against Xe. Her twin, Ex, is back, battle-damaged. (1k sub special)

Minus designs of Xe and XOXO by InukoExo

Xe watching the battle from afar

A teaser for Xe's dialogue sprites