Reason: Yukichi in his final phase (“Service Unavailable”) can be a bit flashy.

“Unpaid debts? Space conquest? That's funny, I don't remember anything like that... If I did, it must've been a LONG time ago.”― Yukichi, Not Found


Yukichi is an Half Alien who lives in Kepler 503, his mod has 3 songs in total, Bad Gateway, Not Found and Service Unavailable..

Were you looking for the [1]Friday Night Fever Yukichi?

He is featured in the mod "Cosmo Calamity".

Yukichi is an alien being who wears a mainly pink outfit consisting of a pink hoodie with a checkered hood, black pants or shorts, and a pair of pink and purple sneakers along with matching leg warmers. During his third song, "Service Unavailable," he demonstrates the ability to levitate in the air - his sprite also glitches out considerably, displaying a black bar every few frames. Yukichi's hoodie bears the number of his home planet, Kepler 503.

Note: None of these cameos are canon to Yukichi's story.

Yukichi: Wow! I don't see foreigners around this planet often!

Yukichi: Nice to meet you friends! Care to introduce yourselves?

Girlfriend: Me? I'm Girlfriend and the short one here is Boyfriend!

Girlfriend: Sorry, I mean the handsome one!

Yukichi: Anywho... What brings you all here?

Girlfriend: Ah right, we WERE here for a reason... but it seems I can't quite remember... The trip here has got me a bit woozy...

Girlfriend: I'll try to remember what it was later...

Yukichi: A song...? Well I do love some welcome songs! Let's do it!

Yukichi: Oh? What is it, friend?

Girlfriend: It was about...

Girlfriend: Unpaid debts or something...

Girlfriend: or probably something to do with a space conquest? I'm really not thinking correctly here...

Yukichi: Unpaid debts? Space conquest? That's funny, I don't remember anything like that... If I did, it must've been a LONG time ago.

Yukichi: Do you evade your taxes?

Girlfriend: Yeah, give us a moment, Yukichi.

(She pulls you into a whisper)

Girlfriend: BF, I DO remember... But I just don't want to be the bearer of the bad news...

Girlfriend: It might bring us into more trouble than we've already got, we should get out of here before we make anybody upset.

Girlfriend: My dad told me about this planet long ago, he said he'd "make it as he envisioned". But I think that's just a way of saying he's gonna conquer this planet and use it for something else...

Girlfriend: Let's just... fake it until we make it home, okay? We'll get out of here, we could probably just lie to the old man when we get home. Besides, I love music.

(She pulls you out of the whisper)

Yukichi: Another song? Why didn't you say so?

Yukichi: And JUST when I was having fun for once!

Yukichi: You're just another one of those scumbags who just want to take everything away from me, isn't that it?

Yukichi: I know who your father is, I know what you two are going to do to me!

Yukichi: He'll come and get me, I know it. You're just here as his scrawny placeholder. What a coward!

Girlfriend: Ah damn it...! Always the third song, is this a curse?

Yukichi: Enough of your nonsense! If this planet's being taken...

Yukichi: I'D RATHER HAVE IT DIE OVER WITH ME!

Yukichi: and I'm dragging you two with me. 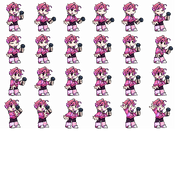 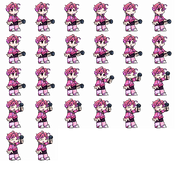 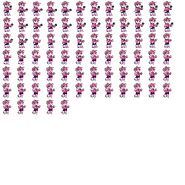 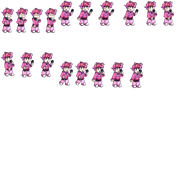 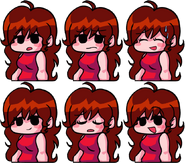 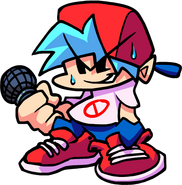 Boyfriend looking nervous near the end of Service Unavailable. 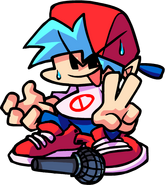 Boyfriend giving his signature peace sign at the end of Service Unavailable. 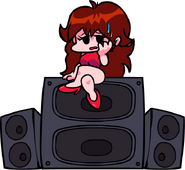 Girlfriend being worried during Service Unavailable. 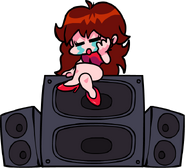 Ditto, but after breaking a combo. 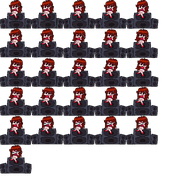 The notes for the mod.

The splashing notes for the mod.

Background for the first two phases.

The first background for Service Unavailable.

The second background for Service Unavailable.

The third background for Service Unavailable. 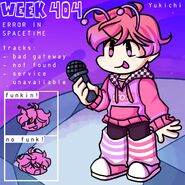 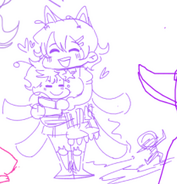 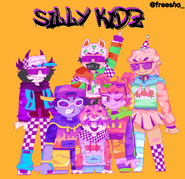 The week name of the mod.