Funkipedia Mods Wiki
Register
Don't have an account?
Sign In
Advertisement
in: Characters, Boyfriend, Based on Media,
and 8 more

Zoe Trent is a dog with a talent for acting and singing. In Friday Night Funkin', she appears as a skin mod for Boyfriend. The mod is created by NerdiestAlpaca.

She has ice blue eyes, lilac colored fur and lighter purple markings along her face, eyelids, and chest. Her ears are a violet-purple colored and resemble hair, matching the spiked tuft of bangs she has, with a single streak of pink in the center. She usually wears a black beret on her head, along with her diamond studded gold collar. She also has a mole on the right side of her lower lip. 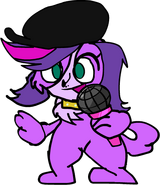 Zoe's Icons as of the updated version. 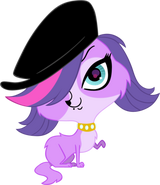